Side-effects of platinum containing antitumour drugs could soon be a thing of the past thanks to a new series of platinum compounds developed by researchers in the Netherlands.

Side-effects of platinum containing antitumour drugs could soon be a thing of the past thanks to a new series of platinum compounds developed by researchers in the Netherlands. 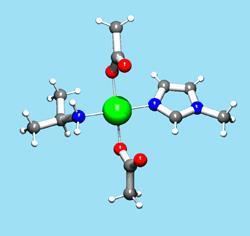 Platinum-containing drugs bind to DNA and interfere with the repair mechanism of cancer cells, ultimately causing cell death. However, the success of these drugs has been plagued by the serious side effects experienced by patients who can also develop a resistance towards them. This prompted Jan Reedijk and colleagues at the Universities in Leiden and Utrecht, the Netherlands, to develop trans platinum compounds in which the labile groups sit opposite each other. These differ from well-known platinum antitumour agents cisplatin and carboplatin in which the labile groups are on the same side of the complex.

Ligands present on the platinum complex detach on binding to DNA. Acetate groups were chosen as leaving groups because the severe side effects of existing platinum drugs are thought to be triggered by the nature of the chloride leaving groups. If these groups are changed to dicarboxylate ligands, for example in carboplatin, the side effects are considerably reduced.

Reedijk’s trans platinum compounds have been tested in cisplatin-resistant and cisplatin-sensitive cells and show promise as a new class of antitumour agents. The next stage in developing the platinum compounds as drug candidates is to prove that the biological activity is maintained in vivo. ’The development of these new trans compounds into a clinically useful drug will no doubt present an important advance in platinum antitumour chemistry,’ said Reedijk.