All that is small is not nano

Researchers suggest doing away with traditional definition of a nanoparticle to provide a focus for environmental, health and safety studies, and future regulation

US and French scientists say the term ’nanoparticle’ needs to be redefined to provide a focus for environmental, health and safety studies, and future regulation. According to the researchers, nanomaterials should be categorised based on novel properties that are related to their small size - not, crucially, their size alone.

In most countries, few or no specific regulations exist to govern the safe use of nanoparticles, despite their wide use in cosmetics, sun screens and some drug products. Until a decision can be reached on what exactly constitutes a nanoparticle, however, there can be no clear path forward. Although traditionally thought of as any particle smaller than 100nm, the researchers argue in a review published in Nature Nanotechnology that for the purposes of health and safety, a more rigorous approach to classification is needed1.

Lead researcher Mark Wiesner of Duke University, US, says it is too easy to tar all nanoparticles with the same brush. ’All that is small is not necessarily nano,’ he says. ’You need to have that novel property. The question then becomes: what’s the taxonomy of these nanomaterials?’ 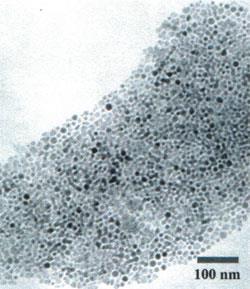 Nano or not nano?

The review highlights various novel physicochemical characteristics of nanoparticles that might help form the basis for Wiesner’s new taxonomy. Size-dependent changes in the crystal structure of particles, for example, can influence their reactivity - importantly, changing how they interact with their environment.

Despite stressing ’novel properties’, however, the study points towards particles at the lower end of the nano spectrum as being the most likely to bear characteristics that would provoke cause for concern. If you want to find a hazardous nanoparticle, you should probably look below the 30nm barrier, says Wiesner.

But by narrowing the focus to particles below 30nm, is Wiesner falling into the same trap as those who claim the 100nm barrier holds any special significance? Ken Donaldson of the Safety of Nanomaterials Interdisciplinary Research Centre in Edinburgh and the author of another recent review of nanoparticle safety2, argues that there is no proven consequence of any size-related change in properties. ’If you focus only on this "quantum effect" of the change in physicochemical reactivity... then [the study] shows that this does set in only at sizes below 30nm. But in general there is no rational basis for restricting the definition of nanoparticles to those below 30nm. It would be premature and without toxicological basis,’ he says.

Teresa Fernandes, a nano safety expert at Edinburgh Napier University, worries that redrawing the boundaries will encourage the idea that there is no need to regulate above 30nm. But she says Wiesner’s work is important because it promotes debate.

Wiesner reasons that the 30nm limit is simply a guide. ’I think it helps us focus on what materials might be of concern in developing regulations, but you can’t imagine that you define something at 30nm as toxic and 31nm as non-toxic,’ he says. ’The focus on novel properties, I think, is one categorisation scheme that might have some relevance for long term approaches to regulation.’