America's lead in chemistry under pressure

US dominance in chemistry research is shrinking in the face of competition from Europe and Asia, two National Research Council reports have warned.

A forecast for the future of US chemistry might read ’cloudy, with a chance of showers’, said report chairman Charles Casey, of the University of Wisconsin, presenting his panel’s findings at the American Chemical Society’s spring meeting in Chicago in March. A second report painted a brighter picture for chemical engineering, but said that the US would find its strength in core topics challenged as research funding was channelled into hot areas like nanotechnology.

Although the US remains at the top of the global chemistry pile, the report pointed to some significant downward trends. Over the past decade, the proportion of chemistry papers published by US scientists has dropped from 23 per cent to 19 per cent, while Asian output (not including Japan) has tripled and now matches the US. Research quality remained high, though: large numbers of US chemists made it to a ’virtual world congress’ exercise, in which international scientists were asked to nominate their dream collaborators in a particular field. 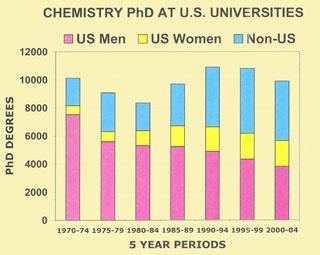 The number of home-grown American PhD students is falling

US worries are particularly acute in education, where the number of chemistry PhDs awarded to home-grown students has fallen by a quarter since the 1970s, though women make up a greater share. Foreign students have plugged the gap, but since 2001, said Casey, it has been harder to keep them in the US after graduation, as tight visas and attractive options in Asia and Europe tempt them away. One problem might be a knock-on effect to the US chemical industry, though the panel didn’t address this directly, finding it hard to access patent and employment figures.

The problem, inevitably, stems with money: while China and India have dramatically increased their investment in science and technology, US federal research support for chemistry has struggled to keep up with inflation. A similar conclusion was reached by a 2005 National Academies report, Rising above the gathering storm, which demanded more science funding from Congress; it pointed out that federal funding of physical sciences research, as a percentage of GDP, was 45 per cent less in 2004 than in 1976.

Still, Casey is optimistic that the American competitiveness initiative, announced in President Bush’s 2006 State of the Union address, will pull chemistry back on track. Amongst other commitments, the initiative promises to double federal budgets for the physical sciences over the next ten years.

And if US chemistry leadership flattens out, that may be no bad thing, Casey conceded, so long as quality is maintained. ’Research is not a zero-sum game; science feeds off other contributions,’ he said.