An NMR machine in a fume hood

Scientists in Germany have demonstrated a portable nuclear magnetic resonance (NMR) spectrometer that’s small enough to be placed in a fume cupboard to monitor the progress of a reaction in situ.

NMR spectrometers are used to determine compound structures. They are typically installed in dedicated laboratories because they are large and their superconducting electromagnets - which split the spin states to create energy gaps, the transition energy of which makes up the final spectrum - need cryogenic coolers, which restrict their mobility. This means that the technique can’t be used in situ, which would provide valuable insights into reactions.

Federico Casanova and coworkers at RWTH Aachen University have overcome this limitation by using a permanent magnet the size of a fist instead of an electromagnet. The cylindrical magnet consists of three rings, each made up of an array of eight samarium-cobalt magnets, separated by parallel gaps. Eight smaller rectangular magnets can be moved in or out of the gaps to ensure a consistent field. The magnet is connected to a portable NMR spectrometer, which is controlled by a laptop computer. 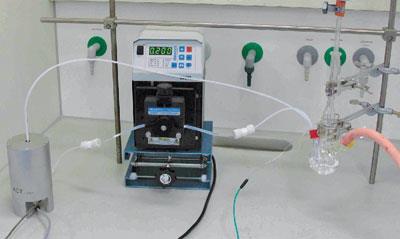 To demonstrate the device and its flexibility, the team used it to follow the hazardous trimerisation of toxic propionaldehyde using an indium trichloride catalyst. As the reaction proceeded, the mixture was circulated through the magnet and back to the reaction vessel using tubing and a peristaltic pump. The team monitored the reaction’s progress online by determining the concentrations of reactant and product from the NMR spectra. ’The advantage here is that during the reaction, we are getting information online,’ says Casanova. ’The problem with a traditional spectrometer is that there are long time delays between sampling and measurements, and during this time the sample is not under controlled conditions.’

’Having a handy way to monitor a reaction - how far it’s gone, how fast it’s proceeding, whether it’s following the right pathway or going off to produce some side product that’s not wanted - rapidly and conveniently in situ in the right place in the process line is potentially very important,’ explains Tim Claridge, director of NMR spectroscopy for organic chemistry at the University of Oxford, UK.

However, both scientists agree that the technique could be improved and Casanova plans to develop better magnets to improve sensitivity and resolution.