Analysing the bracing smell of the countryside

Techniques more usually applied in the food industry have been used to analyse odours given off by farmyard animals.

Analytical techniques more usually applied in the food industry have been used to analyse the odours given off by farmyard animals. The most significant odours are not always those at the highest concentrations, report US researchers, and odour profiles vary substantially with distance. 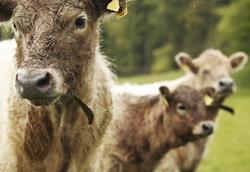 Over 400 individual compounds have been identified by researchers as odorants linked with farmyard animals, but little was known about the relative contribution of these compounds to the overall smell coming from farms. Researchers from universities in Texas and Iowa and from Microanalytics, a Texan company specialising in the analysis of food aromas, used gas chromatography and olfactometry (GC-O) to study the odours given off by cattle and pig farms.

The researchers used a carboxen-modified polydimethylsiloxane (PDMS) fibre to extract odorant compounds from the air inside animal barns and at distances from 20m to 2km away. Compounds were separated and extracted using GC, and the resultant eluent was split between a sniffing port, where a human assessor smelt the separated compounds, and a photoionisation detector and mass spectrometer, which identified each of the compounds. Each odour was then matched to a specific compound.

The researchers rated each compound based on its odour character, detectability and perceived intensity. Previous work with food aromas had shown the researchers from Microanalytics that the most important of these factors is odour character. This is because if the character of an individual odour is easily discernible from the complex suite of odours that normally make up a smell, then the odour has to be an important component of that smell, irrespective of its detectability and intensity.

Using this rating system, the researchers found that the phenol p-cresol, which generates a characteristic ’barnyard’ smell, is one of the most important odour compounds, both at near and far distances. At near distances, many other odour compounds, such as trimethylamine and butyric acid, also contribute to the farmyard smell. At distances of 2km, p-cresol was the only odour compound to register strongly.

Based on these findings, the researchers suggest that efforts to reduce the smell emanating from farmyards should focus on trying to reduce levels of p-cresol. Jon Evans