US researchers are hoping that revisiting old research may hold the key to creating a portfolio of affordable solar energy solutions. After analysing a range of potential photovoltaics, they suggest that materials such as iron sulfide, copper sulfide and copper oxide could trump today’s silicon solar cells in terms of cost, and in terms of rapid production at the scale needed for solar cells to become a much larger player in the green energy market.

Currently energy from traditional silicon solar cells is more than twice as expensive as energy derived from wind and natural gas, explains Cyrus Wadia at the University of California, Berkeley - a member of the team conducting this research. This is something that needs to be addressed before solar cells can become a globally significant source of low-carbon energy.

The main player in the solar power field at present is silicon, but Wadia says that alternative materials are needed to complement silicon cells. ’Silicon is, and probably will continue to be, the dominant player in this market, but, realistically, the price of the silicon technologies needs to drop by three orders of magnitude,’ he says. ’And also whilst silicon is abundant and non toxic, the rate at which it can be processed is a real bottle neck in the whole story.’ Wadia says the question the team are trying to answer is ’can we do it cheaper, and can we do it faster?’ 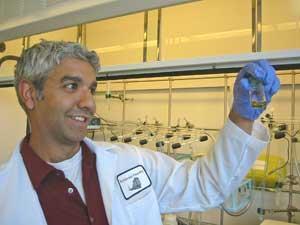 The team analysed a range of possible alternative photovoltaic materials, considering both their availability (with the aim of improving upon silicon’s processing times) and their extraction costs. 23 promising semiconducting materials were assessed, and 12 were found to have the capacity to meet or exceed the global energy need. Of these, nine were found to be cheaper than silicon. ’There were several suitable materials, but the ones we liked the most are iron sulfide, copper sulfide and copper oxide,’ says Wadia.

’Copper sulfide and iron sulfide have been tried before in solar cells 20 to 30 years ago,’ explains Wadia. But at that time silicon emerged as the dominant player in what was then a very small market. The early copper sulfide and iron sulfide cells suffered from low efficiencies, due to the crude technology available at the time. ’Technology has moved on, and we think we can now break through the hurdles the earlier researchers had,’ explains Wadia.

Next the team is testing this theory, and working on making solar cells using iron sulfide. ’We want to push this idea as far as we can, and we are hoping that other researchers will pick up this idea and work with us on this,’ says Wadia.

Jenny Nelson an expert in molecular materials for solar cells from Imperial College London, UK, agrees that comparing different materials can be useful. ’It is good to acknowledge that there are supply issues with some semiconductor materials, such as silicon and cadmium telluride, and to take a step back and consider what other materials are available, if solar power is meet electricity demand on a global scale,’ she says.

However, Nelson adds that there are other things that need to be considered before choosing a new material to work with. ’They haven’t considered the cost of the processing except in the case of silicon,’ she says. We also need to consider how long it is going to take to develop the expertise needed to make good solar cells from these different materials - ’it could take decades to develop the expertise,’ she comments.

Martin Green works on silicon solar cells at the University of New South Wales, Australia, and takes a similar view. ’The findings highlight materials that have not been thoroughly investigated that may warrant more effort. However, their calculations are simplified and my view would be that the methodology does not put enough emphasis on the energy conversion efficiency in determining the commercial viability of candidate materials, or enough emphasis on issues such as toxicity,’ he explains.