Pairs of drugs can suppress the hardiest bugs

Adding a second agent has long been known to alter the response to an antibiotic in bacteria that have developed resistance to that particular drug. Some synergistic combinations can reduce the amount of drug needed to inhibit the growth of resistant strains, while other combinations have a suppressing effect, requiring a bigger combined dose than when each drug is used individually.

Roy Kishony and colleagues at Harvard University’s department of systems biology have now found that this suppressing effect can be exploited in a novel way.

They grew E. coli bacteria with a mutation that makes them resistant to tetracycline antibiotics. The growth medium for those bacteria contained doxycycline, a member of the tetracycline family - its presence would normally favour the growth of the resistant strain when in competition with ’wild type’ bacteria that have retained their sensitivity to the drug. That effect was boosted when they added erythromycin, a macrolide antibiotic which has synergistic effects, to the culture.

But when the suppressive quinolone antibiotic, ciprofloxacin, was used instead, the two antibiotics actually selected against the resistance mutation, allowing the drug-sensitive strains of bacteria to take over. 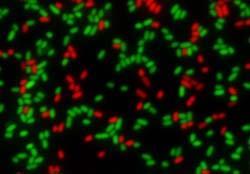 Kishony’s group hasn’t identified the specific molecular mechanism for the interaction between ciprofloxacin and doxycycline. They add that the effect only seems to work one way - while doxycycline-resistant bacteria can be beaten with this combination, ciprofloxacin-resistant strains cannot.

Nevertheless, the team are optimistic about the potential value of these results in developing new methods for tackling resistant bacteria with antimicrobial combinations.

Antibiotic resistance has often been blamed on the routine use of antibiotics in farming to tackle low-level disease. ’But if these observations can be shown to be correct, it will result in the continued effective use of antimicrobials in man and animals,’ said Tony Andrews, a farm vet and head of Responsible Use of Medicines in Agriculture, a coalition of farming organisations that promotes healthy livestock farming. ’This may not be a new antimicrobial dawn but [this strategy] could well assist in delaying the sunset,’ he told Chemistry World.

However, he warned that drug licensing authorities may be sceptical about the use of antimicrobial combinations because of their unpredictable effects.