First measurements of the biological effects of antiproton radiation.

The idea that antimatter beams could treat cancer might seem ridiculous. But researchers working at Cern’s particle accelerator laboratory in Geneva don’t think so. They have just reported a successful first experiment into the biological effects of antiproton radiation on living cells.

As spokesperson Michael Holzscheiter explained, the international team found that an antiproton beam was four times more effective than a proton beam at killing a focused area of hamster cells suspended two centimetres deep in gelatine. The experimental setup was intended to simulate irradiating a section of tissue in the body.

Proton beams have been used as conventional cancer therapy for at least 40 years, following Berkeley physicist Robert Wilson’s suggestion in 1946 that particles like protons might be more effective than x-rays at treating tumours. 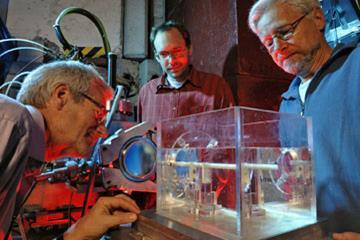 X-rays, protons and other particles all damage DNA by disruptive radiation. But proton beams have an advantage over x-rays, explained Holzscheiter: the particles do less damage to healthy tissue surrounding a tumour.

While an x-ray beam deposits energy along its entire path through the body, a beam of charged particles does damage only after electrical interactions have slowed it sufficiently to create a high chance of collision with atomic nuclei. This means that proton beams deposit most of their energy over a focused area, such as a collection of tumour cells, in the last millimetre of their journey.

Almost thirty proton beam therapy centres have been established worldwide, treating thousands of patients. At least 10 more are currently planned. Carbon ion beams, more effective at removing resistant tumours, are used in three treatment facilities: two in Japan, and one in Germany. A new clinic will open in Heidelberg, Germany, at the end of 2007.

The Cern scientists tested antiprotons - like protons but oppositely charged - with the same therapeutic idea in mind. An antiproton beam, they found, deposits even more energy at its end point, because the annihilation of antimatter with matter creates a shower of short-lived energetic particles.

The next steps, said Holzscheiter, would be to compare antiprotons to carbon ion beams, and to try irradiating cells at a greater surface depth. There are still some safety questions to address, he said. For example, some of the energetic particles created in an antimatter-matter collision are not deposited locally but shoot straight through the body.

Any commercial enterprise using antimatter therapy is a long way off, even if antiprotons come through all their tests. While a modern carbon ion facility, like Heidelberg’s, costs €150-200 million, an antiproton clinic would cost €500 million, Holzscheiter estimated.

But a far-sighted US company, NanoLife Sciences, already owns the intellectual property rights for such an idea. Jesse Milares, vice-president for the company’s financial operations, told Chemistry World that NanoLife is working with Brookhaven National Laboratory, US, to design a particle accelerator that uses antiprotons.

Antimatter persuaded to react with matter

Researchers have unintentionally induced a chemical reaction between matter and antimatter.

Tumour growth fuelled by stress hormones could be fought with beta blockers.