Protein lining allows cornea to stick to the eye without stitches

A European research team has developed a polymer-based artificial cornea that could go into human trials as soon as next spring. If successful, the corneas could help the millions of blind people worldwide who are unable to get a transplant because of the dearth of human donors.

The new artificial cornea adheres to eye cells without needing to be held in place by sutures - a major advantage over other artificial corneas, which can cause inflammation and infection, says Joachim Storsberg, head of functional medical polymer research at the Fraunhofer Institute for Applied Polymer Research (IAP) in Potsdam.

The research team is still ’optimizing’ the artificial cornea in rabbit tests but, says Storsberg, ’If everything goes on schedule, if everything goes well, then we will start human trials next year, maybe in the spring.’ 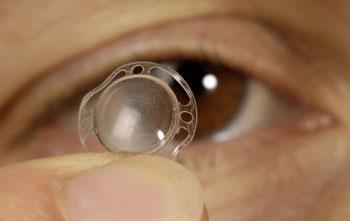 The new cornea grips the eye because its edges are coated with a ’special protein’, which connects to the natural cells of the eye. ’In this way, the cornea implant can firmly connect with the natural part of the cornea, while the centre remains free of cells and therefore clear,’ Storsberg explains. The protein is also able to survive sterilization at high temperatures.

The polymer used to shape the artificial cornea absorbs no water, however the optical anterior part of the implant is coated with a hydrophilic polymer keeping it constantly moist with tear fluid, Storsberg said. The polymer is already commercially available, though Storsberg would not name the firm that supplies it. ’I am not allowed to tell you,’ he said. ’This is secret. I can only say it is a specialized polymer. You don’t need tons of it.’

’When we get them (cut polymers), then we start with our chemistry on them,’ says Storsberg. ’It is only the basic material to start with. We modify it.’

Storsberg declines to go into further detail about the technology, saying only that it is nanotechnology-based and that the team will publicly release details when their paper is published in a scientific journal.

Others involved with the work include Sohrab Darougar, professor emeritus of University College London’s Institute of Ophthalmology, as well as medical eye specialists at the University of Regensburg and Martin Luther University in Halle-Wittenberg. Potential commercial applications are being handled by Rhine-Tec of Krefeld, Germany, and Coronis in Munich.

Storsberg would not speculate on how long the corneas would last, but said the team obviously would strive for ’the maximum possible’ durability. The blind, he says, ’are happy with any time they can get’.