It’s well known that exposure to asbestos causes lung cancer, but there have been suspicions that it could also be linked with ovarian cancer. Now, researchers have shown that there is indeed a causal association between asbestos exposure and ovarian cancer. 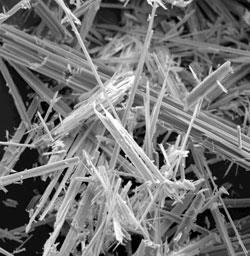 Over the years, there have been several suggestions that asbestos might be a risk factor in ovarian cancer on top of links to lung cancer, mesothelioma and asbestosis. A working group at the International Agency for Research on Cancer (IARC) recently concluded there is sufficient evidence for a causal association, and now a study led by Leslie Stayner, from the School of Public Health at the University of Illinois at Chicago, US, confirms it.

A meta-analysis of 18 studies of women who had been exposed to asbestos through their work was carried out. Earlier studies failed to prove the link because of concerns that tumours had been mis-classified - until recently it was difficult to discriminate between peritoneal mesothelioma and ovarian cancer. Across all the studies, women exposed to asbestos were about one-and-three-quarter times more likely to develop ovarian cancer as those who were not. Particularly high rates were seen in UK women who manufactured gas masks, and thus had been exposed to high levels of the fibres.

Several mechanisms have been proposed as to how asbestos increases susceptibility to ovarian cancer, mostly involving chronic inflammation caused by fibres persisting in ovarian tissue. It is unknown how the fibres get into the ovaries - they might be transported through the reproductive tract, or fibres may be carried in the bloodstream or lymph system, penetrating the ovary through the mesothelium.

According to Hilde Langseth, a researcher at the Cancer Registry of Norway, the association between asbestos exposure and ovarian cancer has been an ongoing research question for a long time. ’The meta-analysis performed by Stayner and coworkers is an important quantitative evaluation of this association in occupationally exposed workers,’ she says. ’They demonstrate an increase in the pooled estimate for ovarian cancer in relation to exposure to asbestos.’

However, she adds, even if asbestos use has been forbidden in some countries in the western world since the 1980s, a significant proportion of the world’s population still works in environments in which they are exposed to asbestos. ’The authors report that at least 90,000 people die from asbestos-related cancers every year,’ she says. ’The need for increased knowledge about the association and the carcinogenesis of ovarian cancer is therefore warranted.’