US electrochemists have given hope to biologists who want to inject precise and tiny volumes of fluids into living cells. They have developed a syringe that delivers attolitre (10-18 l) volumes.

Michael Mirkin of Queens College, City University of New York, used electrochemistry to control flow into and out of a glass ’needle’. The technique was used to inject fluids into living cells, reports Mirkin’s team in the Proceedings of the National Academy of Sciences.

"It’s extremely simple. All you need is a piece of glass and two wires." - Michael Mirkin, City University of New York

Other methods of dispensing such small volumes are known, but Mirkin said his attosyringe offers key advantages. ’It’s extremely simple. All you need is a piece of glass and two wires - that’s it,’ he said. Coupling this with a voltage gives a device that is less expensive and complicated than previous dispensers. The method could also be scaled up or down and even used in parallel, Mirkin told Chemistry World. 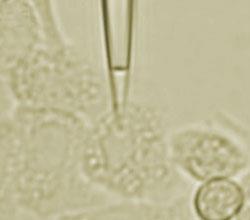 The syringe needle is made from glass using a laser puller; a procedure that Mirkin said takes only a few seconds. The needle is first filled with a solution that won’t mix with the solution to be injected. An electrode is then placed in the syringe fluid and the tip is dipped into the injection solution, which also contains an electrode.

Varying the potential between the electrodes causes a change in the surface tension between the two solutions. The resultant force is strong enough to suck the outer solution into the syringe. Switching the potential in the other direction forces it out again. ’It looks simple but in terms of physical chemistry it’s quite complicated,’ Mirkin noted. The whole process can be watched using a video microscope but changes in the resistance or current in the circuit can be monitored and used to control injection for volumes too small to be seen.

Mirkin’s team tested the syringe by injecting a fluorescent dye into living human breast cells. The results offer a proof of concept for the new technique, he said. ’As there is no pressure applied we can make the tip as small as we want,’ he added. In theory, this allows for injection of substances such as proteins or DNA to specific cellular regions, without harming the target cell. ’We didn’t observe any dead cells. The cell doesn’t "feel" the injection as there is very little damage to the membrane,’ Mirkin explained. Electrochemistry even helps to find the cell, as changes in the current flowing across the interface at the tip indicate that a cell is close.

Andreas Bruckbauer, a chemist working on nanodispensers at the University of Cambridge, UK, said the technique was neat, and would be useful  for cellular use. ’It is surprisingly simple and overcomes current problems to control the amount of liquid injected’ he said. Mirkin intends to develop the attosyringe for other applications, particularly as a pump in nanofluidics.

The use of an applied potential to control the amount of liquid that exits the pipette could be a very significant method, said Harry Heinzelmann, vice president of the nanotechnology and life sciences division at the Centre Suisse d’Electronique et de Microtechnique in Neuch?tel, Switzerland. ’This is one of the best results in this area,’ said Heinzelmann.
’The control of liquid volume is quite unique, and certainly a big advantage,’ he said.