Scientists are a step closer to understanding the processes that control the growth and spread of nerve cells, following the discovery of a protein complex that directs the transport of building material to growing axons. 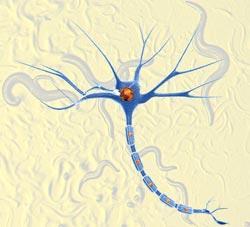 Axons are long protrusions from neurons that carry nerve impulses to other nerve cells (neurons). They grow by forming a growth cone, which extends through the surrounding tissue to link up with other neurons. Many biomolecules, including some proteins, are involved in this growth process and perform a variety of functions, including guiding the axon and transporting material to the growth cone.

The international team of researchers, led by Michael Hengartner from the University of Zurich, Switzerland, investigated this complex process by studying mutant strains of the nematode Caenorhabditis elegans. In one of these mutants, in which the gene unc-69 was disabled, they found that the axons grew abnormally. This abnormal growth closely resembled that seen in C. elegans strains with mutations in the gene unc-76, which is known to be involved in transporting material within axons.

By creating numerous strains of C. elegans with different mutations in unc-69, the researchers found that it codes for a 108-amino acid protein that forms a complex with the UNC-76 protein. The researchers propose that this protein complex links up with the protein kinesin, which transports material around cells, and gets it to transport membrane proteins to the axon growth cone.

Neurobiologists Shuo Luo and Michael Nonet from the Washington University School of Medicine, Saint Louis, US, said this research ’provides new insights into both the molecular mechanisms and the complexity of axonal trafficking.’