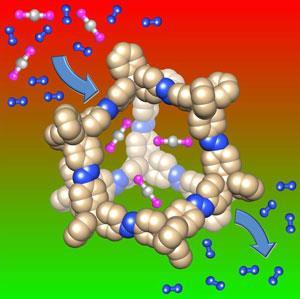 The azo linkages (blue) in the porous polymers kick out gaseous nitrogen, while trapping carbon dioxide

Scientists have developed a new class of porous polymer that can efficiently trap carbon dioxide while actively rejecting nitrogen. The new material, whose key properties rely on the presence of multiple azo (–N=N–) units within the polymer’s chemical structure, is stable at high temperatures and could be used, the researchers say, as a way to scrub power station flue gases of CO2.

‘Post-combustion flue gases contain significant amounts of N2 and if this is stored along with CO2 then we would need at least six times more storage space,’ says research team member Ali Coskun, of the Korea Advanced Institute of Technology in Daejon, South Korea.

In an effort to address this problem, the team coupled the nitro aromatic compound tetrakis(4-nitrophenyl)methane with a range of different amines to create azo-linked covalent organic polymers – azo-COPs. These nanoporous compounds adsorb CO2 while refusing to accommodate N2. At 50°C, for example, almost 300 times more CO2 is adsorbed than N2. The compounds remain stable and retain their efficiency at high temperatures, and can be easily regenerated by reducing the pressure to release trapped CO2 for sequestration, Coskun says. The presence of the azo groups is almost certainly responsible for both the adsorption of the CO2 and the rejection of the N2, with unpaired electrons acting as ‘bait’ for the CO2, whilst the twin nitrogen atoms of the azo unit repel molecular nitrogen.

The current compounds are expensive, Coskun concedes. ‘But we are currently working on inexpensive polymers where azo units are installed on affordable alternatives.’

Experts in the field are intrigued by the work but say more questions need to be answered. ‘An excellent concept,’ says Trevor Drage of the University of Nottingham in the UK. ‘A key future study would be to see if the phenomenon of increased selectivity or N2 phobicity still occurs in the presence of moisture. Previous studies have shown that sorption of water onto the surface of microporous polymers can significantly alter their affinity to CO2.’ Drage also says that while the selectivity is high, the adsorption capacity compared to other adsorbents is relatively low.

Andy Cooper at the University of Liverpool in the UK says: ‘To me, it is a little unclear to what extent these materials are truly “N2-phobic” – but they do seem to adsorb relatively less N2 as temperature is increased, and attaining persistent selectivity for CO2 over N2 at higher temperatures is certainly of practical importance.’ Cooper agrees with Drage that the question of water vapour also needs to be looked at.