Escherichia coli, with each strain able to fluoresce one of seven different colours. To produce messages with these fluorescent bacteria, the group simply deposit individual strains into the wells of a microtitre plate in sets of two, with each pair representing a specific letter, number or punctuation mark. 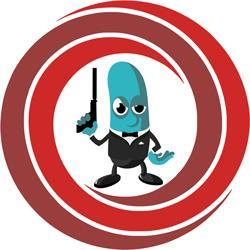 So an orange strain followed by a green strain represents an ’i’ and a yellow strain followed by a red strain represents an ’r’. With seven fluorescent strains, this system gives the chemists 49 characters to play with, more than enough to encode 26 letters, the numerals from 0 to 9, and the major punctuation marks. Using a 144 well plate, they were easily able to encode the sentence ’this is a bioencoded message from the walt lab at tufts university 2011’.

Selective markers can be used as cipher keys. Here, Ampicillin gives the message ’this is a bioencoded message from the walt lab @ tufts university 2011.’ Kanamycin decodes to ’you have used the wrong cipher and the message is gibberish.’ The last matrix produces no message

E. coli strains this fluorescent message could be made either to appear automatically after a certain period of time or only once the cells were exposed to a fluorescence-inducing chemical. By placing two strains that are resistant to a different antibiotic in each well, Walt and his team also showed how the array could be used to display two different messages, depending on which antibiotic the strains were exposed to.