Justin Gallivan and Shana Topp, from Emory University, Georgia, say bacteria programmed to follow particular molecules could be used to deliver drugs to specific targets, or to chase down and degrade pollutants in soil -  effectively becoming cellular robots. 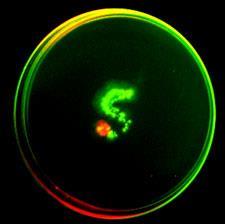 A solution of theophylline patterned in an ’S’ shape: cells with the riboswitch (green) migrate down from the top, while cells without (red) stay in their original position at the bottom

In theory, changing these receptors would attract bacteria towards new molecules. In practice, said Gallivan, things aren’t that easy: the altered receptors must still fit in the cell membrane, and it’s difficult to get them to sense a chemical completely unrelated to their natural targets.

Instead, Gallivan and Topp fiddled with the machinery linking receptors to flagellae. They picked Escherichia coli  bacteria missing a key signalling protein, so their flagellae could only rotate one way, causing cells to tumble incessantly and never move anywhere. The scientists then introduced a customised riboswitch: a small strand of RNA containing the gene for the missing protein. Normally, the RNA looped over the key gene, preventing its expression. But the riboswitch could also bind a small molecule - in this case, theophylline.

When theophylline bound to the riboswitch, the RNA strand opened up, allowing the key missing gene to be expressed. With their flagellae now functioning normally, the E. coli  cells tumbled less frequently and started moving. The bacteria migrated towards their natural chemoattractants - they were not sensing theophylline, but the more theophylline there was, the faster the cells could move.

When the researchers sprinkled a path with theophylline, the cells appeared to follow the drug. Whenever they veered away from high theophylline concentrations, the riboswitch ’handbrake’ came on.

The pseudo-response to theophylline was not quite as sharp as the natural protein-sensing mechanism, said Gallivan: ’But we can still get the behaviours we want. And, Nature has had a few billion years to work on the problem; we’ve only had a few months.’ Gallivan said he was already creating riboswitches which helped cells chase down herbicides.

Mark Goulian, who works on re-engineering bacterial chemoreceptors at the University of Pennsylvania, US, said the work was an elegant use of riboswitch technology. ’Given the powerful methods available for selecting new riboswitches, I expect the researchers will be able to readily adapt the system so that it can respond to diverse compounds,’ he told Chemistry World. He added that bacterial chemotaxis was an excellent system for exploring general approaches to designing synthetic biological circuits.