German chemicals giant Bayer is commercialising a new way of making chlorine that it says uses 30 per cent less energy than current production methods. Better still, the company plans to make it possible to retrofit the technology to existing plants.

Around 64 million tonnes of chlorine are produced each year, the majority of which is made by oxidising the sodium chloride in brine (often sea water) by passing an electric current through the solution. According to Hans-Joachim Wittig, head of climate and energy at Bayer MaterialScience, the production of chlorine uses around 210 million MW hours of electricity per year - and is indirectly responsible for releasing 110 million tonnes of CO2 into the atmosphere each year.

A spokesperson for Euro Chlor, the trade association representing European chlorine producers, told Chemistry World that electricity accounts for 50 per cent of the cost of producing chlorine - reducing these costs is a key part of the association’s sustainability programme.

The standard membrane-based electrolysis process works by oxidising chloride to chlorine at the anode. This process is separated, by an ion exchange membrane, from the cathode part of the cell where water is reduced to hydroxide (caustic) and hydrogen gas. The voltage needed to run this process is about 3V. 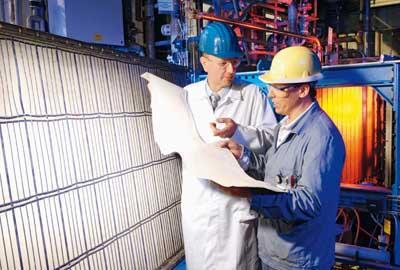 ODC technology uses up to 30 per cent less energy

If the hydrogen gas is collected it can be burned to produce energy to help power the process and somewhat reduce the amount of energy consumed.

Bayer’s new electrolysis method turns this hydrogen into hydroxide at an ’oxygen-depolarised cathode’ (ODC) that has been designed to replace the cathode at which the hydrogen is generated. In the ODC system, water is oxidised by oxygen gas to form hydroxide ions, completely changing the reaction that occurs at the cathode, eliminating the production of hydrogen and reducing the cell voltage to 2V.

According to Andreas Weber, part of the process innovation team at Bayer MaterialScience, the ODC system is ’a porous catalyst system made from silver catalyst particles supported on a PTFE-coated metal support.’ He says that one of the key challenges of the project was to develop an ODC that wasn’t supported on the carbon supports used in many fuel cells, as ’carbon isn’t stable under the operation conditions which consume the carbon’.

The company is in discussions with the major cell manufacturers ThyssenKrupp Uhde, Chlorine Engineers, Asahi Kasei and Bluestar, which make more than 98 per cent of the world’s chlorine electrolysers, to develop the ODC so it can be retrofitted into their cell designs.

’For the technology to become widely adopted it is important to be able to modify the ODC to different electrolyser cell designs and this is something we are confident we can do,’ says Weber. ’We can also produce the ODCs on a technical scale of about 2.5 to 3m2, which is far bigger than those used in alkaline fuel cells that are only 20 to 30cm2.’

Bayer is currently planning to build an ODC-based chlorine production plant in collaboration with electrolysis cell maker ThyssenKrupp Uhde which is scheduled to come on stream at the start of 2011. The plant will be able to produce around 20,000 tonnes of chlorine a year and Bayer aims to use the project to prove to other chlorine producers that the technology is ready for industrial use.