Bees get a buzz from dancing

Brain chemical could account for the elaborate dance of the honeybee.

Researchers have identified a brain chemical that could account for the elaborate dance of the honeybee, one of the most complex behaviours in the invertebrate world.

Bees returning to the hive from a successful foraging trip will begin to do what’s known as a ’waggle dance’, a ritual boogie that passes on the location of a promising food source to other bees embarking on a foraging flight of their own.

Treating foragers with the biogenic amine octopamine makes them dance more, says Gene Robinson, professor of entomology and neuroscience at the University of Illinois at Urbana-Champaign, US. This offers a relatively simple mechanism for the evolution of this complex social behaviour. 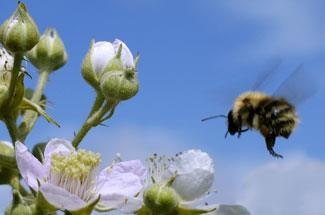 Several lines of evidence indicate that octopamine could be the neurotransmitter released in the honeybee brain in response to rewarding stimuli like flowers rich in nectar or pollen. The finding that bees dosed up with this same neurotransmitter dance harder and for longer than controls could help account for the link between foraging and dancing. ’They value the food source more highly, and consequently show greater motivation to communicate about it to nestmates,’ suggested Robinson.

The effect of octopamine on dancing behaviour is interesting, admits Randolf Menzel, professor of neurobiology at the Freie Universit?t in Berlin. But he is cautious about the interpretation of this research.

These pharmacological experiments are ’rather dirty’ and ’do not give any conclusive answers with respect to the neural mechanisms,’ said Menzel. ’Other biogenic amines like norepinephrine may be involved.’

Robinson acknowledges that octopamine may not be the sole chemical linking foraging and dancing behaviours. ’Dance vigor and dance duration appear to be more sensitive to octopamine treatment than dance likelihood,’ he and his colleagues report. This may indicate that different neural mechanisms are involved in the processes that control whether and how to dance, they have suggested.