They may be unable to take snapshots of their forest escapades, but researchers from the University of Dusseldorf have now shown how male orchid bees are able to tell their own tale by collecting and storing fragrances.

Male orchid bees spend much of their lives collecting volatile compounds - usually terpenoids - from various strongly-scented sources, including flowers, leaves and, less appealingly, rotting fruit and faeces. By dissolving the compounds in lipids that they secrete from a gland inside their heads, the bees can store them in pockets on their back legs.

The new work by the German team reveals that the bees recycle the lipids to build up their own unique bouquet of smells during the course of their lives.

’With this continual collecting, we wondered if their leg pockets would eventually fill up, leaving no room for more fragrance,’ said Thomas Eltz, the lead author of the study. ’So we hypothesised that the bees must selectively reabsorb and reuse some of these lipids from the pockets to leave the mixture of fragrances where they are.’

Eltz and his colleagues made deuterated versions of the bee lipids and smeared them onto the sponge-like leg pockets of the insects. After three days, the deuterated lipids planted by the researchers had disappeared completely from the leg pockets and reappeared in the bees’ heads.

The team also tested the bees’ ability to reuse their lipids. ’We put smelly compounds that we know they like on filter paper, and found the deuterated lipids that the bees had used to collect the compounds on the paper,’ Eltz told Chemistry World. ’This recycling is a very economic way of collecting fragrances, rather than having to continually synthesise lipid molecules.’ 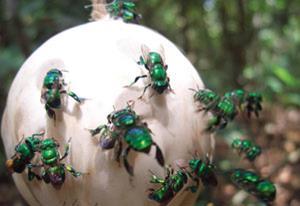 Each bee gradually builds up its own signature fragrance, said Eltz. ’The cute thing about this process is that it enables a male to accumulate a complex and species-specific bouquet of many fragrance compounds which are concentrated over time,’ he added. ’The bee is able to make an essence of its life.’

The fragrances are released during courtship and territorial behaviour. ’We think the scent attracts females but that hasn’t been shown,’ said Eltz.