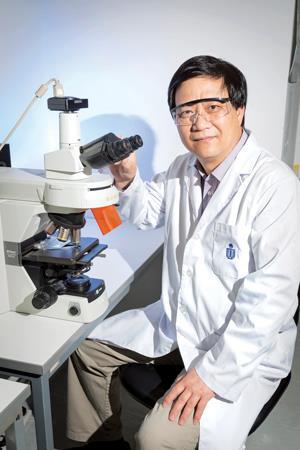 Ben Zhong Tang is a professor at the Hong Kong University of Science and Technology (HKUST). His research interests include synthesising new speciality polymers and luminescent materials for high-tech applications.

What is your research group working on at the moment?

We do a lot of different things. One thing we are working on is developing new polymerisation reactions. In particular, we are looking at the polymerisation of triple bond monomers, such as acetylene and other alkynes as well as nitriles. These molecules are different from ‘conventional’ monomers; for example, nitrile are very difficult to polymerise because they are very stable.

So why triple bond monomers in particular?

Double bond chemistry has been well developed: vinyl polymers such as polystyrene, polypropylene and poly(vinyl chloride), are all made from double bond monomers. However, when they are polymerised, the double bonds become single bonds – they are electronically saturated and therefore all of these polymers are electrically insulating. When triple bond monomers are polymerised, they still have delocalised p electrons – a good example of this is polyacetylene, which is electrically conductive. Alan Heeger, Hideki Shirakawa and Alan MacDiarmid won the Nobel prize in 2000 for finding this out. We are interested in this type of conjugated system to make speciality polymers with electrical and optical activities.

What sort of applications could these polymers have?

At the moment, most are still in the laboratory stage. We have developed highly luminescent polymers, which can emit different colours of light very efficiently and can be used in light emitting diodes.

We also work on helical polymers, which have pharmaceutical applications and can also be used to separate out different drug enantiomers. A lot of drugs are mixtures of plus and minus forms, but in the future, the US Food and Drug Administration (FDA) may require enantiomerically pure forms. This so-called chiral separation is very hard, but drugs could be passed through a column of these polymers, and chiral interactions used to separate the plus and minus forms.

Your research on aggregation induced emission (AIE) received a lot of attention. Can you tell us more about it?

There are a lot of light emitting materials. This type of material, if you dissolve it to make a dilute solution, gives a very strong emission. However, for many of these kinds of dyes, if their concentration becomes high, their emission becomes weaker. This phenomenon has often been referred to as aggregation-caused quenching or ACQ for short. This is a problem in things like mobile phone displays, where the light emitting material is used as thin solid film. In the solid state, you know, concentration is the highest. 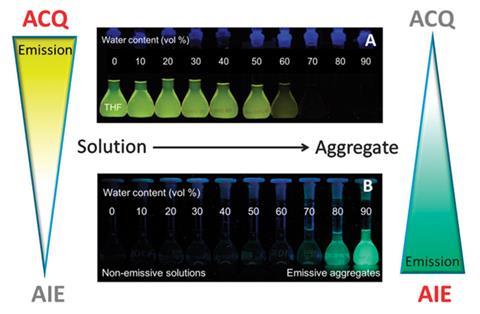 Aggregation of luminophores will lead to two different effects on photoluminescence

We have developed a family of luminogenic materials1,2 that behave in exactly the opposite way. When they are in solution, there is no emission, but when they aggregate, they emit very efficiently. It’s unusual and intriguing: previously, people have tried to solve the problem of ACQ by trying to separate the light emitting molecules. But now we have a system where the more it aggregates, the better!

Yes, one very good application for these systems is in biology.3 One of the reasons for this is that light emitting species are aromatic rings, which are hydrophobic. In the body, we don’t have organic solvents: we only have water. Water is hydrophilic, so it isn’t compatible with the aromatic molecules. Traditional ACQ systems are not very good for biological applications due to the aggregate formation, but our systems work well in water, also owing to the formation of aggregates!

What current problem would you like to see polymer chemistry provide a solution to?

There are so many problems! In China, pollution is a big issue and this includes plastics. If we can come up with an economic way to recycle polymers back to monomers, then make them into new polymers in an economic way, we could reduce environmental pollution.

Energy, of course, is another issue. One day we may have a very good polymer-based solar cell.

Finally, do you have any tips for successful scientific research?

My philosophy is to do something simple, easy to reproduce, but useful. I think our AIE research is a good example of this: it is simple, useful, yet easy to do and develop.