Bending the rules for arynes

Two teams of synthetic and computational chemists in the US have developed complementary explanations for the unusual selectivity observed in reactions of indolynes. The results point to the possibility of a more general model for predicting the reactivity of arynes based on ring distortion and polarisation and open up interesting possibilities for complex molecule synthesis.

Arynes are an unusual class of reactive intermediate molecules, often drawn as aromatic ring systems containing a carbon-carbon triple bond, or as diradicals. Indolynes are a subset of these based on the indole ring system, and whereas many arynes show very little selectivity in their reactions, indolynes can be remarkably discriminating - particularly when the formal triple bond is close to the indole nitrogen atom (in the 6,7-position).

6,7-indolyne reacts with 2-substituted furans to give the more sterically hindered product

Buszek and Cramer’s paper1 describes cycloaddition of furans to indolynes to make tetracyclic adducts. ’The regioselectivity [Buszek’s team] were seeing was quite counterintuitive,’ says Cramer - there seemed to be a strong selectivity for the most sterically crowded product, with the furan substituent pointing towards the methyl group on the indole nitrogen rather than away from it.

’The results [of our calculations] fell in nicely with a picture of indolynes having much more polarised formal triple bonds than their hydrocarbon counterparts,’ Cramer adds. This pointed to a change in mechanism, with electron-rich furans following a more electrophilic substitution-like pathway that favours the more crowded product; and electron-poor furans reacting in a more sterically-controlled cycloaddition pathway favouring the less hindered adduct.

Garg and Houk’s work2 examines direct addition of nucleophiles such as alcohols and amines to the indolyne triple bond, and they too observed good selectivity with 6,7-indolyne. However, they also found they could get good selectivity when the triple bond was on the opposite side of the ring (4,5-indolyne), but less when it was in between these two extremes (5,6-indolyne). Houk explains that, while the selectivity has generally been rationalised simply in terms of polarity, they found that distortion of the ring geometry has a similar effect. 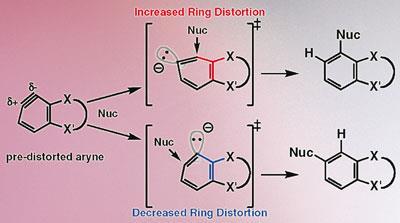 ’Electron-withdrawing groups can distort the aryne so that one end looks carbanion-like and the other is more carbonium ion-like,’ says Houk, ’but this distortion can also be induced just by ring strain. In indolyne, both of these effects are working in the same direction and cause the 4,5- and 6,7-indolynes to be highly distorted.’

When a nucleophile attacks the distorted ring, it is much more likely to react if it approaches the more flattened, carbonium ion-like carbon. Houk points out that this is because attacking the other end would mean the ring would have to distort into a different shape in the transition state, which involves a much larger energy barrier.

Houk believes that the combination of the two teams’ work brings us much closer to a more general way of predicting or controlling the selectivity of aryne reactions. ’I think we now know qualitatively, without doing any calculations, what’s going to happen,’ he says, ’but we intend to do a more general investigation into a broader range of substituents to form a more quantitative model.’

As a synthetic chemist, Buszek is very excited to see the effects of the work on synthetic possibilities. ’Taken together, these two complementary analyses offer a tremendous new insight into the reactivity of arynes in general.’ He hopes that the work will rekindle interest in arynes for making complex natural and unnatural molecules.