Scientists from Korea have found that with the use of graphene nanosheets, the fabrication of bendable power sources is possible.

Electronic devices are no longer confined to the home or office. We travel with them, carry them around and even wear them. To make equipment like roll-up displays and wearable devices achievable, the power source that supplies them must also become more flexible.

The major challenge of developing a truly bendable power source has been the shortage of material that is both highly flexible and has superior electronic conductivity. Polymers are typically used, but they can degrade at relatively low temperatures, which makes them less than ideal.

Kisuk Kang from the Korea Advanced Institute of Science and Technology in Daejeon, and colleagues, have developed a graphene based hybrid electrode producing a flexible lithium rechargeable battery. The cathode material, in this case V2O5, is grown on graphene paper using pulsed laser deposition and graphene paper coated in lithium is used as the anode. The resultant battery is lightweight and flexible enough to be twisted or rolled. 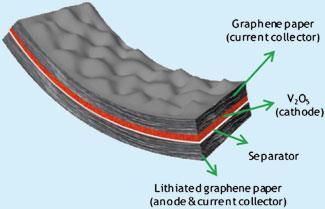 The flexible lithium battery based on graphene paper

The performance of the new battery is promising, says Kang. ’The electrode exhibits significantly improved electrochemical performance in almost all aspects of electrochemical properties, such as higher energy density, power density and better cycle life, compared with non-flexible conventional electrodes,’ he adds.

’The gradient nanostructure is curious, and their approach to fabricating a flexible roll-up device is also promising for the next generation of energy storage,’ comments Hiroyuki Nishide, an expert in functional polymers and their use in electronics from Waseda University, Japan.

Kang hopes to extend the work to increase the battery’s performance and long term stability, perhaps using a solid state or polymer electrolyte. He also believes that by combining this new technology with other functional materials, it could be used in applications such as catalysis, photovoltaic devices and organic light emitting diodes.