Tumour growth fuelled by stress hormones could be fought with beta blockers.

Researchers in the US have shown how the stress hormone noradrenaline fuels the growth and spread of aggressive, malignant tumours. The data suggest a new and potentially life-saving role for beta blockers, drugs commonly used to treat heart arrhythmias and high blood pressure. Beta blockers reverse the effects of noradrenaline. 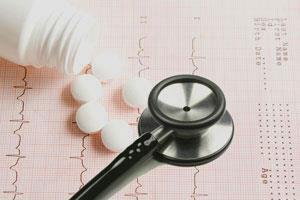 MMPs break down the tissue surrounding tumours, allowing them to move more easily into the bloodstream and spread around the body - the process of metastasis. VEGF stimulates the development of blood vessels that nourish tumours, helping them to grow. Treating the cells with a widely prescribed beta blocker called propranolol prevented the release of all of these compounds.

’Given what we’ve shown, I think that beta blockers could allow chemotherapy to be more effective and prolong and improve the quality of a patient’s life,’ Glaser told Chemistry World.

The starting point for this work was an earlier study by Anil Sood, a physician scientist and a colleague of Glaser’s at the University of Texas. His work showed that noradrenaline can stimulate the production of the same compounds in ovarian cancer cells. Glaser now says that, in the light of work on other types of cancer, there is sufficient evidence to support a clinical trial.

’The effects of stress can be seen in an animal model of cancer and we’ve shown this same result in at least two other types of cancer,’ said Glaser. ’Given the resources, I would love to take this to clinical trial. Beta blockers are already in such wide use and are so innocuous, so it should be possible.’

Sood told Chemistry World  that the therapeutic potential of beta blockers could be of particular benefit for cancer patients under chronic stress, such as those who are full-time caretakers of chronically ill or elderly relatives.

’Chronic stress could play a role in the progression of cancer and, if this is the case, beta blockers could block these effects,’ said Sood. ’At this stage we need to combine clinical and laboratory studies. We must learn from patients in the clinic and take what we find back to the laboratory so that we can develop and improve cancer treatment.’

Pharmaceutical promise in the desert

Cancer cells rely on the heat shock protein Hsp90, but healthy cells need it as well.