With ever growing concern over the speed at which fossil fuel reserves are being used up and the damage that burning them does to the environment, the development of sustainable fuels has become an increasingly attractive topic. Hamish Curran, chief executive of TMO Renewables, talks to Chemistry World about the future of the biofuels industry and the new technology that TMO has developed that converts biomass and municipal waste into ethanol.

The company’s process demonstration unit (PDU) can be found nestled in the Surrey green-belt countryside in Dunsfold Park - which was the British Aerospace site where the Harrier Jump Jet was designed and built. The site also plays host to the Top Gear studio and the airfield doubles as a playground for the Stig and test track for the show.

TMO take biomass - high carbon content organic material - such as grass cuttings, wood chips, paper, kitchen waste and the waste products from wheat such as husks and straw and turns them into a liquid fuel, bioethanol.

Conventional methods to produce biofuels involve a feedstock such as corn being broken down by enzymes into simple sugars such as glucose and then subjecting these sugars to a yeast-based fermentation over a couple of days to produce ethanol. According to Curran, this method is time consuming and uneconomical as energy and money are lost in preparing and pre-treating the feedstocks.

In contrast, the TMO process involves thermophilic microorganisms that can consume long chain sugars at high temperatures. They first break down the biomass into long chain sugars and then absorb them into their cells for growth. This process is similar to when humans convert food into sugar and produce lactic acid as a by-product. The by-product for the microorganisms is ethanol.

’These dry feedstocks start at one end of the process as dry bulk and all the clever engineering in operation here is designed to liquefy the material and turn it into a fine stream of bug food which makes the bugs happy and happy bugs make ethanol,’ says Curran.

Like all industrial processes TMO’s started in the laboratory, but the company has been able to scale it up easily for larger industrial applications. The Dunsfold Park PDU provides clients with the opportunity to have their own particular biomass feedstocks processed into ethanol resulting in immediate data on whether the technology would fit into their business. 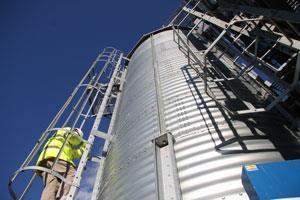 Curran explained that the recession has seen TMO’s client pool suffer. ’They are having difficulty obtaining the necessary capital to invest in technologies such as ours,’ he says. He went on to say that the PDU ’gives us a competitive edge that others don’t have because they might be creating a vision from a technology that is still in the laboratory.’

TMO’s technology is yet to hit the marketplace and the company is still investing heavily to develop it, causing the company to make a loss of ?4.5 million in 2008. Yet despite the recession and loss-making nature of the business, investors have been so convinced TMO’s technology will be successful that they bought up ?11 million of shares in the company last year. Curran says much of this funding will be used to entice fee paying clients to invest in the technology - and that TMO has already had significant interest from the US and China.

In the food versus fuel debate, Curran explains that TMO is an interested by-stander. Its technology doesn’t use the food part of the crop to make ethanol and therefore is not affected by the debate. Curran explains that ’there has been an extraordinary successful campaign against biofuels driven by the hysteria in 2008 and 2009 when commodity prices of wheat and rice shot up and there was a coordinated campaign to blame biofuels.’ In reality, he says, the price rises were due to an increase in energy prices and crop failure leading to an increased demand for grain. This view was supported by a UK government report that was released this year.

When asked about the failure of the Copenhagen Climate conference to reach an accord on climate change and carbon emissions, Curran explained that he wasn’t that disappointed with the outcome. He suggested that the fact that China wanted to get involved in cutting carbon emissions was a massive step forward for the world. I think we have made a major step forward with one of the world’s largest economies and we have seen that there is a massive appetite for engagement in these types of solutions as we are very busy with business development in China,’ he stated.

Curran believes that biofuels are the immediate answer to our mineral stock depletion. At present the only way we can drive vehicles full of people and baggage around is from energy in liquid form. Oil is a finite resource and as it becomes rarer it will become more expensive. ’We did well as a nation when we were an exporter of energy, now we are an importer. If we can make fuels from locally grown agricultural waste products, then we can impact on energy saving issues,’ he said.