A liquid form of the oxygen-binding protein myoglobin retains its biological function even though it seems virtually water-free, researchers have found.

Last year, Stephen Mann of the University of Bristol, UK, and his coworkers described how they could make a kind of liquid protein by wrapping them with electrostatically bound polymers.1 The protein-polymer conjugate formed crystals that melted at close to room temperature. But the protein they used - the iron-storage protein ferritin - is atypical, a peptide cage for iron ions rather than a catalytic enzyme.

Now the researchers have shown the method works for myoglobin, the molecule that ferries oxygen in muscle tissue.2 They grafted positively charged diamine groups onto the surface of myoglobin, and then conjugated them with alkylsulfonate anionic surfactants attached to polyethylene oxide. They freeze-dried the solution and found that the resulting solid melts to a viscous dark brown liquid at room temperature. 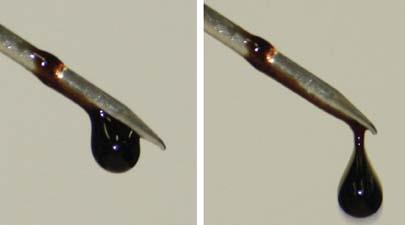 A liquid myoglobin droplet at 60?C and atmospheric pressure after 5 seconds (left) and 10 seconds (right)

Infrared spectroscopy suggests that the myoglobin molecules retain their native structure and their ability to reversibly bind oxygen and carbon monoxide. ’The oxygen molecules can go on or off the protein depending on the partial pressure,’ says Mann. ’So the liquid can store and carry oxygen, and then release it when the pressure is reduced,’ - making it a kind of artificial blood.

As well as being potentially useful, this finding might seem surprising. According to thermogravimetric analysis, the liquid protein contains fewer than four bound water molecules per protein-polymer conjugate. This challenges evidence that proteins require a critical coverage of water on their surface - a hydration layer - to function properly, and perhaps even to retain their shape. Mann claims that the results ’could lead to a revaluation of the importance of water molecules in protein folding’. He and his colleagues speculate that the polymer surfactant coating might act like a surrogate hydration shell.

Bertil Halle, a biophysicist at the University of Lund in Sweden, says that, if the protein is truly in equilibrium and not kinetically trapped, it is interesting that it keeps a native-like, functional structure. But he questions whether this says much about the role of water in stabilising that state. Without water, he says, ’van der Waals interactions assume a much greater role than in aqueous solution and essentially do the job of the hydrophobic effect’ in holding the structure together.