US scientists say they have solved a fundamental problem hampering renewable energy generation - how to split water cheaply into oxygen and hydrogen, under benign conditions, so that the gases can be stored as fuels.

Commercial catalysts for splitting water by electrolysis already exist, and the electricity they use can be renewable if it is generated by solar panels. But they come at a price. The cost of platinum, the most widely used catalyst, is currently around US $2,000 per troy ounce. Chemists have designed alternative catalysts, based on the complexes plants use in photosynthesis (where sunlight is harnessed to break water apart), but these are relatively inefficient.

Now a team led by Daniel Nocera, at the Massachusetts Institute of Technology, has found a catalyst that uses cheap, abundant metals - cobalt and phosphorus - and works at an environmentally friendly neutral pH to release oxygen from water.1 Nocera says the system is not only far cheaper than platinum, but also an improvement on photosynthetic complexes in plants: ’We’ll go beyond photosynthesis, because this catalyst you can just make in a glass of water.’

The exact mechanism of catalysis isn’t clear. The researchers run a current through an indium tin oxide (ITO) anode placed in a solution of cobalt and phosphate salts. A thin film then forms on the anode, produced as Co2+ ions lose electrons to the anode to form Co3+ which joins with phosphate ions to form a precipitate. After possible further oxidation to Co4+ ions, the catalytic film pulls electrons from water, leaving behind oxygen atoms and protons (H+). At the film’s surface, oxygen atoms are brought together and oxygen gas bubbles from the anode, while cobalt collects electrons and falls into solution as a Co2+ species - ready to be regenerated by oxidation and returned to the catalyst. Meanwhile, the protons in solution are carried by phosphate anions to a conventional platinum cathode where they gain electrons to form hydrogen. 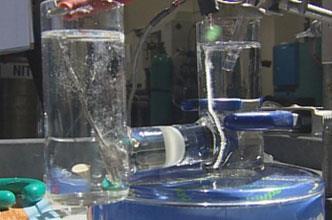 The new oxygen catalyst in action in Dan Nocera’s laboratory at MIT.

Luis Echegoyen, director of the National Science Foundation’s Chemistry Division in the US, says the simplicity of the process is amazing. ’These chemists may have given us a future way to efficiently obtain oxygen by splitting water,’ he comments.

Nocera says that while platinum electrodes are quite good at generating hydrogen (combining protons and electrons), they waste a lot of energy in making oxygen - so his catalyst markedly improves the efficiency of the water splitting system.

And the film’s ability to regenerate itself gives it the edge over nature’s water splitting apparatus, he adds; in a leaf, the peptide subunit that holds the oxygen evolving complex has to be replaced every thirty minutes. The most impressive aspect of the system, however, is that it can operate effectively under normal atmospheric conditions in water at pH 7. ’We don’t have to do anything special with the water and in fact what we’ve learned is that it even operates with impurities around,’ says Nocera.

If the same system is to be used in devices that generate power, it must be coupled with a fuel cell that can turn hydrogen and oxygen back into water to release energy. This reaction is also catalysed by platinum - but an organic polymer now developed by Bjorn Winther-Jensen and colleagues at Monash University in Australia promises to provide a cheaper and more efficient electrode.2 The team’s new poly(3,4-ethylenedioxythiophene) (PEDOT) catalyst is a conducting polymer, which coated on a porous Goretex membrane can match the oxygen reducing ability of platinum, the researchers claim. Unlike the platinum electrodes, the organic electrode isn’t slowed by the presence of carbon monoxide, a possible contaminant in fuel cells.

Theoretically, Winther-Jensen’s polymer could work in any kind of fuel cell. However, he is sceptical about the role of hydrogen as a fuel. ’We tend to think that hydrogen would be the obvious fuel, but honestly I’m not too sure about that,’ he says. ’You still need electricity to split water to produce hydrogen and you might as well use electricity to produce a metal and use that as an energy carrier instead of hydrogen.’

Nocera is more optimistic. He says his discovery could revolutionise the way energy is generated and stored. ’With the discovery I have you can really start thinking about setting up a distributed system, where you generate your electricity locally from the sun [via solar panels] and if you can’t use it directly then you use my discovery and you make fuel [which can be easily transported or stored].’

Mark Jentsch, a sustainable energy expert at the University of Southampton, thinks the research should apply to any renewable energy source, not just solar. ’The storage is the big issue with all renewables,’ he says. But he adds that wind energy might be more efficient than solar power as a way to generate the electricity needed to split water.