The crystal structure of human aromatase, an enzyme that is a key drug target for treating breast cancer, has been solved by US scientists.

Debashis Ghosh, of the Hauptman-Woodward Medical Research Institute in New York, who led the study, hopes details of the placental aromatase protein’s structure will help the development of a new generation of breast cancer drugs that work by inhibiting the enzyme. 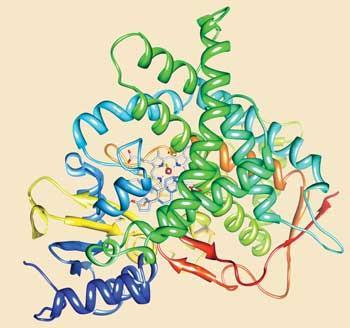 The structure of aromatase

Aromatase converts androgens to oestrogens - a group of hormones important in sexual development, but which can be involved in many types of breast cancer when they fuel tumour growth.

Three drugs that cut down on oestrogen production by inhibiting aromatase are already in clinical use to treat breast cancer. ’But these have been developed without the knowledge of what the active site actually looks like, so they are unlikely to be the perfect molecule,’ comments Stephen Neidle, director of Cancer Research UK’s biomolecular structure group, who describes the work as ’an important and groundbreaking study.’

’There has been a lot of effort in the last 35-40 years to crystallise this protein,’ says Ghosh. A particular challenge in working out aromatase’s structure, he adds, is that it is highly degradable and must be anchored to a membrane in order to allow its substrate steroid access to the active site.

The team spent a decade developing the right detergent to break down the lipid membrane within which the protein was bound, and replace it with a sufficiently similar layer of detergent molecules. ’What we have made is the intact molecule in its native form,’ Ghosh explains.

The aromatase enzyme examined by the US team catalyses the conversion of the steroid hormone androstenedione into oestrone, and has an unusually specific binding site for the androgen. The researchers crystallised aromatase in a complex with androstenedione, revealing which residues interact with the steroid. Ghosh and his colleagues have already set out to develop structure-based aromatase inhibiting drugs.

’This is a significant step forward,’ adds Neidle. ’With this information, you can design new drugs far more rationally.’