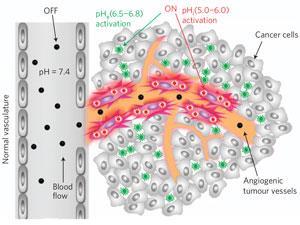 A new ‘smart’ polymer that is extremely sensitive to pH can highlight tumours with exceptional accuracy. Cancerous tissues are usually more acidic than healthy tissues, so the technique could help surgeons ensure that they get all of the tumour, as well as letting oncologists detect metastasis early on.

Many research groups have functionalised polymer nanoparticles, quantum dots or carbon nanotubes to label tumours and make them easier to image. But some simply accumulate at higher concentrations in the tumour, meaning healthy tissue can be hard to distinguish from diseased. Of those that are actually ‘switched on’ when they enter a tumour, many target specific biomarkers, which may not be present in a patient's cancer.

Biomedical engineer Jinming Gao and colleagues at the University of Texas Southwestern Medical Center, US, have made a fluorescent nanoprobe that responds to increased acidity. Almost all solid tumours are acidic because cancer cells' glycolysis is running in overdrive, breaking glucose down into lactic acid.

The nanoprobes are made using co-polymers that dissociate below a fixed pH. Embedded in this structure are infrared fluorophores that remain invisible when part of the probe but fluoresce brightly when freed. The researchers designed the co-polymers to dissociate at a pH of 6.9. This means that the probes are virtually invisible in blood, which has a pH of 7.4, but are over 100 times brighter in tumours, which are typically pH 6.5 to 6.8.

They tested their nanoprobes in mice with various tumours. In each case, the nanoparticles successfully picked out the tumours under near-infrared fluorescence imaging – in one lung tumour, the team could identify tiny, cancerous nodules just 1mm3 in size. They found no obvious signs of toxicity in the mice such as weight loss or decline in kidney function.

The team are now trying to get the technology into the clinic and plan to explore potential toxicity issues in greater depth. ‘I think it's industrialisable,’ says Gao. ‘We're trying to work with different companies now who want to negotiate the licence with our university.’

Gooitzen van Dam, a surgical oncologist specialising in tracer development at the University of Groningen in the Netherlands, is excited both by the generic mechanism for cancer detection and by the huge contrast between the signal in cancerous and healthy tissue. However, he points out that a return to normal pH in cancer tissue does not always indicate cell death, which might be a problem for clinical treatment monitoring.