BSE pathogens passed on by air

The infectious misfolded protein molecules that cause mad cow disease can be transmitted in the air, say scientists

Prions - the infectious misfolded protein molecules that cause mad cow disease (bovine spongiform encephalopathy, BSE) and other fatal neurodegenerative diseases including vCJD (variant Creutzfeldt-Jakob disease) in humans - can be transmitted via aerosols, a new study finds.

The researchers behind the work stress that this airborne route of prion infection, which was observed in the lab using aerosol sprays, is unlikely to occur in nature, but advise labs, slaughterhouses and animal feed plants to revise their safety procedures as a precaution.

Transmissive spongiform encephalopathies (TSEs) are caused in several mammals by prions entering the host organism, mainly via contaminated food, drink and bodily fluids, which act as a template that causes a protein found in brain and nerve cells to replicate in a misfolded form. This replication eventually destroys the infected cells and ultimately kills the animal. 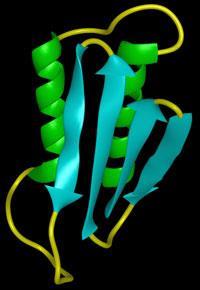 It was generally thought that prions were not transmitted by air, but now Adriano Aguzzi and colleagues at University Hospital Zurich, Switzerland, with Lothar Stitz at the Federal Research Institute for Animal Health in Tuebingen, Germany have confirmed an airborne route to infection.

Mice were placed inside inhalation chambers and exposed to aerosols containing prion infected mouse brain cells. After only a minute’s exposure, the team observed that all of the mice had become infected. ’We have good evidence that the prion gets access to nerve endings in the nose and thereby moves to the brain without further need for propagation and/or adaptation,’ explains Stitz.

’The main impact of the paper is the implication that prion disease can be spread by droplet infection,’ comments Graham Jackson who investigates prions at the Medical Research Council’s Prion Unit, University College London, UK. He adds, however, that ’the levels of infectivity required for this experimental transmission would never be exhaled from an infected individual and there is no epidemiological evidence to suggest droplet infection poses any significant risk of horizontal transmission of CJD.’

Stitz agrees that such conditions are unlikely to exist outside the lab, but he insists it is necessary to know about all possible routes of infection. ’I think at least in slaughterhouses this finding might cause a check of procedures used and, if necessary, a revision of methods or improvement of personal security equipment. There are so many pathogens around that we still do not know about and one should not challenge them to act,’ he adds.