A team of US chemists has developed a practical use for buckyballs: as wheels on a nanoscale car

A team of US chemists has developed a practical use for buckyballs: as wheels on a nanoscale car. The nanocar’s development has revealed that nanoscale objects can move about in the same way as normal sized objects. 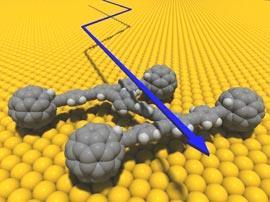 The nanocar was developed by chemists from Rice University, Houston, led by James Tour, and consists of a chassis made of oligo(phenylene ethynylene), alkynyl axles and four spherical C60 fullerene (buckyball) wheels. It was built from the bottom up by a complex suite of chemical reactions, including a novel in situ ethynylation method for attaching the buckyballs to the alkynyl axles.

Using scanning tunnelling microscopy, Tour and his team found that the nanocar would move about fairly freely on a gold surface in response to increases in temperature. Indeed, at temperatures above 300?C the nanocar moved around too fast for the chemists to keep track of it.

The nanocar moved as a result of the buckyball wheels turning, just like a conventional car. This is in contrast with most other nanoscale objects, which tend to move by sliding around.

Tour and his team are now trying to gain more control over their nanocar by moving it around using electric fields. The team is also looking at installing a light-powered molecular motor. In addition, they are investigating whether they can replace the buckyball wheels with other spherical molecules, such as carboranes, that are easier to attach.

Other nanotechnologists are reserving judgement about nanocars. ’At a quick glance the work looks fun, with some perfectly nice chemistry and interesting studies of molecular motion, but it’s unlikely that "nanotrucks" will ever be useful, ’ said Milo Shaffer, lecturer in nanomaterials at Imperial College London, UK.