Buckyballs worth their weight in gold

Move over carbon, a team of US chemists and physicists has uncovered evidence for the existence of hollow buckyball-like cages made of gold.

Move over carbon, a team of US chemists and physicists has uncovered evidence for the existence of hollow buckyball-like cages made of gold. 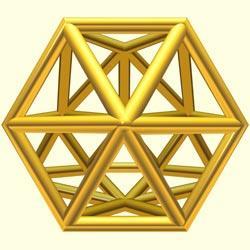 Researchers at the University of Nebraska and Washington State University decided to investigate gold because of its range of highly impressive properties at the nanoscale, including catalytic activity and fluorescence. Previous studies had suggested that gold molecules with less than 13 atoms formed flat, planar structures, while a 20-atom gold molecule formed a pyramid structure. The researchers wondered whether gold molecules containing between 14 and 19 atoms would form spherical structures, as they step-change from the flat to the pyramid structure.

They used mathematical modelling to calculate the likely low energy structures for gold molecules containing between 14 and 19 atoms and found that those with 16-18 atoms could theoretically form hollow spherical cages.

To determine whether these gold molecules really existed, the researchers worked out the molecules’ predicted photoelectron spectra and compared them to the spectra generated by nanoparticles produced by firing a laser at a gold sample. The theoretical and experimental spectra were a good match.

’Many different kinds of atoms can be trapped inside [these gold cages]’, predicts Lai-Sheng Wang at Washington State University, and the researchers now plan to explore this possibility.