Calcium caught in an inverse sandwich

Chemists in Germany and Switzerland have discovered the first stable complex of calcium(I) - a highly unusual structure for a metal whose chemistry is normally dominated by the +2 oxidation state.

Matthias Westerhausen and colleagues at the Friedrich Schiller University in Jena have found that two calcium(I) ions can be stabilised by inserting an arene group between them, forming a stable structure the team have termed an ’inverse sandwich’ complex. This kind of complex has been seen before with group three metals such as gallium and indium, but not with group two metals. 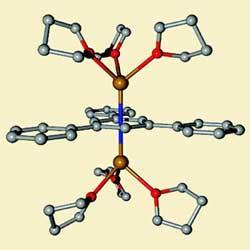 While other alkaline earth metals, including magnesium and zinc, have been complexed in the +1 oxidation state before, the ’inverse sandwich’ structure represents a very different way of stabilising these metal(I) ions, says Westerhausen. ’The Mg(I) and Zn(I) compounds synthesised recently have relied on large ligands to protect a metal-metal bond,’ Westerhausen explains.

’Instead of using large ligands to shield the metal atoms, what you can do is find a molecule with an empty orbital of the right energy to accept an electron from the calcium atom,’ Westerhausen adds. ’The first and second ionisation energies of calcium are very different, and it happens that the pi-star orbital of triphenylbenzene is just the right energy to accept only the first electron from a calcium atom. What you end up with is two calcium(I) ions, and the arene in the middle with a 2- charge from the two unpaired electrons.’

Westerhausen discovered the novel complex accidentally, while researching calcium analogues of Grignard reagents. The group had made the magnesium Grignard in the normal way, reacting (triphenyl)phenyl bromide with magnesium metal. ’But when we did the same thing with calcium, we got a completely different compound - which was halide-free, and paramagnetic,’ Westerhausen explains. Being paramagnetic meant the complex had some unpaired electrons - a crucial indicator of calcium(I) - which prompted a deeper investigation of the new complex to establish its structure and properties.

Richard Layfield, a main-group chemist from the University of Manchester, UK, thinks that Westerhausen has done a ’fantastic job’ of characterising the complex. ’The fact that they can even handle the compound is impressive [given its extreme sensitivity to oxygen], but they have isolated it and proved that it’s not calcium(II) with a range of experiments. It’s a really nicely rounded off piece of work,’ Layfield adds.

Westerhausen wants to extend this idea to the heavier alkaline earth metals, such as strontium and barium. ’These metals have lower ionisation potentials, so we need to find the right arene pi-system to match up with the energy. I think magnesium is too hard to stabilise this way, but with the heavier metals it should be possible.’