Can arsenic bind to bacterial DNA?

Contrary to accepted wisdom, scientists claim that arsenic could replace phosphorus in the DNA backbone and remain stable in water

In 2011, a paper published in Science claimed that bacteria from Mono Lake, California, US, had not only evolved to tolerate arsenic, but had incorporated it into their DNA. The paper led to criticism, with many scientists saying that the arsenate compounds formed would be unstable in water. Now, scientists from the US and China say that arsenic substituted DNA may be more stable than first thought.

Jiande Gu and Jerzy Leszczynski and colleagues from Jackson State University and the Chinese Academy of Sciences ran a computational study that revealed that the base-stacking structure of DNA could increase the resistance of the arsenate towards hydrolysis, compared with current arsenate models. ’However, our study also suggested that arsenated DNA (As-DNA) is still less stable than normal DNA when hydrolysis is considered,’ says Leszczynski. ’Normal’ DNA has a backbone made of sugar and phosphate groups joined by phosphodiester linkages. Arsenic replaces the phosphorus in As-DNA.

’The model system we investigated was dinucleoside-arsenate-deoxyguanylyl-3’,5’-deoxyguanosine (dGAsdG) - a basic unit that captures all the vital characteristics of a single DNA strand,’ says Leszczynski. ’Previous theoretical studies were based on arsenate esters and not a reliable DNA unit, and did not include crucial base-stacking and intra-strand hydrogen bonding interactions.’ These interactions could increase the energy barriers of the process, leading to the triangular bipyramid structures of arsenate being formed during hydrolysis of the arsenate diester in As-DNA, says Leszczynski. 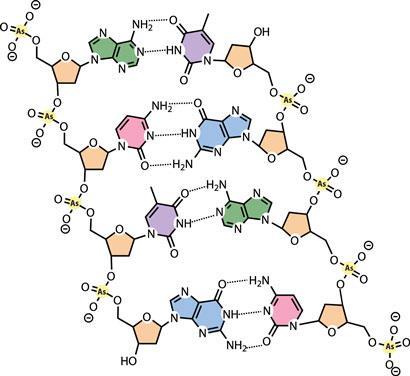 DNA structure with arsenic replacing phosphorus in the backbone

However, ’the differences in reactivity that are identified here (owing to the secondary structure) are dwarfed by the intrinsic differences in reactivity between phosphorus and arsenic,’ says Nicholas Williams, an expert in phosphate ester hydrolysis at the University of Sheffield, UK. ’That is the core problem arsenic has in substituting for phosphorus in DNA - arsenic esters are dramatically more reactive, and so the differences would need to be much greater to take the incorporation of arsenic into a stable DNA structure seriously.’

Lynn Kamerlin, who studies molecular biology at Uppsala University, Sweden, agrees. She adds that although moving from looking at structural features to considering energetics is a step in the right direction, the work isn’t validated against experimental data. ’In fairness to the authors, the fact that there really is minimal experimental data to calibrate against doesn’t make it easier,’ she says.

’Now we’re investigating how inter-strand hydrogen bonding affects the hydrolysis stability of As-DNA. Our results may provide some details of possible modifications of the As-DNA that could increase its stability. This would definitely set off an experimental race to its synthesis,’ concludes Leszczynski.