Mineral crystals blasted out from volcanoes can provide a window into the powerful processes going on inside those volcanoes, say UK and German earth scientists. The question now is whether these crystals can actually help to predict future eruptions.

Mineral crystals make up the igneous rocks that form as lava cools and it has been known for some time that their precise chemical composition should reflect the conditions they were exposed to within the volcano. The difficulty has been identifying this chemical composition in sufficient detail and then relating it to the volcanic activity that was occurring when they formed.

This is what a team of earth scientists led by Kate Saunders at the University of Bristol has now done. ’We have shown we can link the chemical signatures locked up in crystals to the real-time monitoring of active volcanoes,’ she tells Chemistry World.

Using various analytical techniques, including backscattered electron imaging and electron probe analysis, Saunders and her colleagues studied 300 separate crystals of the mineral orthopyroxene produced by the volcano Mount St Helens between 1980 and 1986, when its activity was closely monitored. Located around 200km south of the US city of Seattle, Mount St Helens famously experienced a massive eruption on 18 May 1980, which devastated 600km2 of surrounding land. 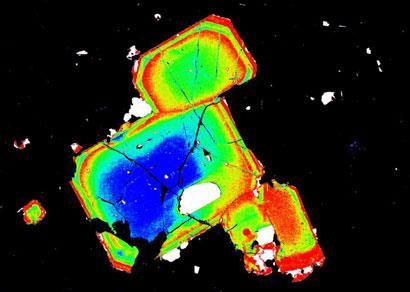 Crystals of orthopyroxene form in the molten magma within a volcano, which erupts as lava. The crystals form either as a result of regions of the magma cooling or due to the magma releasing dissolved gases such as carbon dioxide. Because this happens fairly regularly, the crystals tend to build up in layers, like tree rings.

When they analysed the orthopyroxene crystals from Mount St Helens, Saunders and colleagues found that the chemical composition of the layers often differed, forming distinct zones. Furthermore, these zones reflected conditions within the volcano at the time.

Crystals with cores rich in a metal, such as iron, but with outer zones rich in other metals, such as magnesium, tended to form when the volcano was active. At this time, the volcano began to fill up with new magma coming up from greater depths, prior to erupting. As this new magma often had a slightly different chemical fingerprint to the existing magma, it generated new zones on the crystals with a different chemical composition to the existing zones.

In contrast, crystals with a similar chemical composition throughout formed at quieter times, when new magma wasn’t entering the volcano. On top of this, the rate of crystal growth was generally higher at more active times, because more carbon dioxide tended to be released from the magma.

The obvious problem with using this new understanding of crystal formation to predict future eruptions is that scientists can only analyse the crystals after an eruption has already happened. For Saunders, however, the key is learning more about what causes volcanoes to erupt.

’The better we understand the internal workings of volcanoes, the better we can anticipate their future behaviour,’ she says. ’You wouldn’t ask a doctor to predict the exact time of someone’s death. However, by monitoring a patient’s vital signs they are able to provide a much more thorough diagnosis. The same is also true with volcanoes. The more we know about the processes that occur beneath them and the timescales over which these occur, the better prepared we are to deal with future eruptions.’

Michael Carr, a volcanologist and geochemist at Rutgers University in New Jersey, US, agrees: ’A better understanding of magma chamber processes should help in forecasting, because the facts and inferences made here confirm with direct evidence the link between magma pulses and seismicity.’