Cantilevers bend over for drug detection

Arrays of flexible microcantilevers - micrometre-thin diving boards - can be used as sensors to detect binding interactions between drugs and their targets, a team of international scientists has shown.

The researchers, based in the UK, Australia and Kenya, say their technique is sensitive enough to be used for high-throughput drug screening and could speed the development of new drug-resistant antibiotics. ’We have a new way to screen and identify hits for potent drugs very rapidly,’ says Rachel McKendry, who worked with the team at University College London, ’These arrays can be exploited for screening thousands of drugs per hour’.

By watching silicon cantilevers coated with receptors bend when molecules attach to their targets, researchers have already studied a number of biochemical interactions, including DNA and protein recognition.

The team extended this concept by investigating interactions between the antibiotic vancomycin and an amino acid sequence that was an analogue of a polymer called mucopeptide, found in bacterial cell walls. The cantilevers are coated with drug-resistant or drug-sensitive versions of the analogue before vancomycin is added. In the drug-resistant version, which lacks only a single hydrogen bond within its binding pocket, few drug-target interactions occur. But in the drug-sensitive version, the antibiotic hits its targets, and the build-up of intermolecular forces between drug molecules on the cantilever’s surface causes the silicon board to bend.

The extent of bending, detected optically, acts as a quantitative measure of the affinity of a drug for its target. Arrays of cantilevers, each coated with a different receptor, could allow many targets to be detected in parallel.

The research, says McKendry, may also provide a mechanical explanation for drug action, showing how some exert surface stress on bacteria as they bind, weakening their cell walls. ’Vancomycin is effectively punching holes in the cell wall,’ says McKendry. ’We think that some new antiobiotics may create extended networks - fault lines across the bacteria, which mean they rupture more easily.’ 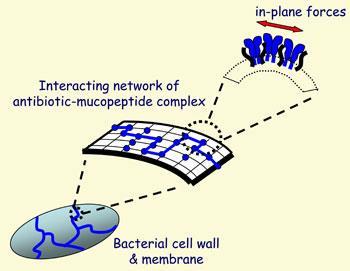 By analysing the bending of cantilevers, the researchers suggest that antibiotics may cause mechanical disruption in bacterial cell walls

Javier Tamayo, a biosensors expert at the Institute of Microelectronics in Madrid, says the researchers have proved they can get reproducible measurements. He adds that while other label-free detectors exist - such as surface plasmon resonance (SPR) - the cantilever has an advantage in that it doesn’t rely on detecting masses, and is therefore sensitive to very small molecules. The team have already shown they can detect vancomycin at clinically relevant concentrations in blood serum and at lower concentrations than SPR.

Crucially, cantilever arrays are already being mass produced for other purposes such as data storage, meaning that the technology should not be expensive.

As for the chances of discovering new classes of antibiotics with the technique, McKendry points out that the research is only at proof-of-principle stage. ’But you can learn more about the way an antibiotic works and that’s important for the future rational design of more effective and powerful drugs.’