US researchers have incorporated carbon nanotubes into organic light-emitting transistors (OLETs) to create devices that rival the performance of their silicon counterparts. This technology could lead to much larger flat screen televisions and displays, which are also cheaper to manufacture.

Organic light-emitting diodes (OLEDs) produce brighter light than liquid crystals and are cheaper to make than inorganic LEDs. This makes them a promising alternative for large flat screen displays. 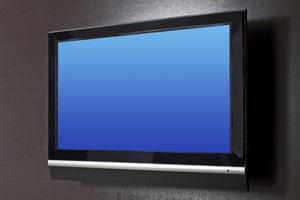 Bigger, cheaper flat screen televisions could be on the cards thanks to an organic device that is both a light source and a transistor

Now a team of researchers, led by Andrew Rinzler at the University of Florida, Gainesville, has tackled this problem by adding a thin network of carbon nanotubes to a transistor. This transistor can perform the switching functions an electronic display needs at very low voltages. ’The goal is to allow people to build bigger screens. We have opened up the field to be able to exploit a whole new class of materials in these devices, to overcome the limitations of polycrystalline silicon,’ says Rinzler.

The team took the design one step further and incorporated an OLED layer into the carbon nanotube-based transistor to produce an efficient OLET - a device that acts as both a transistor and light source for an electronic display. The device comprises a network of carbon nanotubes mounted on a thin dielectric layer. The device is sandwiched between two electrodes and the organic light emitting material sits on top.

Passing a small current through the device provides enough power to produce different coloured light. By adding different organic semiconductors the team were able to produce red, green or blue light without the need for a separate transistor and OLED.

’This concept has the potential to significantly improve OLED display resolution, increase panel size and reduce power consumption,’ says Maxim Shkunov, an expert in organic electronic materials at the University of Surrey, UK. ’However, the realisation of this concept will need to be confirmed by display manufacturers.’

Rinzler believes that his OLET design could be commercialised in the near future. His team plan to build arrays of OLET-based pixels to check that the carbon nanotube technology can be scaled up for big screens. ’Our goal is really to demonstrate all the pieces for a display manufacturer to look at this technology seriously,’ he says.