The catalyst converts glucose, fructose or sucrose directly into methyl lactate which can be simply purified by distillation. This avoids the large quantities of salt waste and complex separation procedures required to isolate lactates from currently used microbial fermentation techniques, explains Esben Taarning, a researcher at catalyst production company Haldor Tops?e, who made the discovery along with colleagues at the Technical University of Denmark in Lyngby.

’It’s a very simple process,’ Taarning told Chemistry World, ’we have an autoclave - which is basically a big pressure cooker - and we put in methanol, the catalyst and add the sugar. In the case of sucrose this is common table sugar.’ After the reaction is finished, the solid catalyst is easily separated from the liquid reaction mixture and the pure methyl lactate can be distilled out. 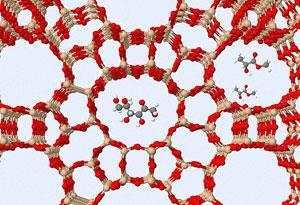 Taarning explains that the key to the reaction lay in taming the normally strong Br?nsted acidic nature of zeolite materials. Zeolites often contain aluminium which leads to strongly acidic H+ ions in the pores of the material. ’We found that these acidic zeolites could convert small, three-carbon sugars into lactates,’ he says, but adds that larger sugars decompose and dehydrate in Br?nsted acidic conditions.

Therefore, the team tried a different family of zeolites - developed by Avelino Corma and his group at the institute of chemical technology in Valencia, Spain2 - in which the aluminium is replaced with tin, titanium or zirconium. This makes the active sites Lewis acidic instead, which completely changes the way they react with carbohydrate molecules. ’We no longer see dehydration reactions,’ says Taarning, ’instead we have a retro-aldol reaction that leads to two three-carbon sugars, which are then isomerised into lactic acid and, in the presence of methanol, converted directly to methyl lactate.’

Mark Davis from the California Institute of Technology, US, thinks that it is fascinating that sugar molecules can react inside zeolites. ’These zeolites are quite hydrophobic,’ he says, ’so to be able to use such hydrophilic substrates is pretty amazing.’ He adds that these materials are very stable and able to be regenerated multiple times by burning off any byproducts that eventually clog the catalyst pores. However, Davis thinks it is unlikely that catalysis will completely replace fermentation for lactate production. ’Depending on the final product you want, you always have to weigh up the two strategies,’ he says. ’But this is opening up the repertoire of reaction pathways at our disposal.’