Chemists have used living cells as test tubes to carry out chemical reactions never before seen within living cells.

Chemists have used living cells as test tubes to carry out chemical reactions never before seen within living cells.

Inside every living cell a plethora of different chemical reactions happen every second, but until now chemists could only tinker with reactions that occur naturally within cells. In a new development from scientists at the University of Edinburgh, UK, reagents and a palladium catalyst were introduced into a cell and reacted together.

Mark Bradley’s team at Edinburgh was inspired by recent work on inserting ruthenium complexes into cells and decided to see if they could use their solid state palladium catalysts to carry out reactions in cells. Palladium is normally toxic, but by immobilising it onto a polystyrene microsphere the team prevented the metal from killing the cells.

’The palladium is trapped but it can react,’ says Emma Johansson who worked on the study. ’After it’s trapped some of the palladium becomes less accessible and we believe this makes for the slightly slower reaction times that we see.’ 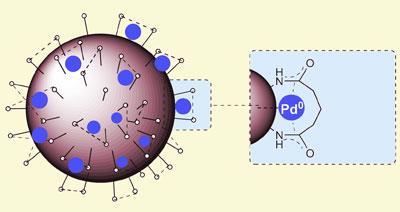 Immobilising the palladium on polystyrene microspheres tempered its toxicity

The microspheres were used to perform both a deprotection and a Suzuki-Miyaura cross coupling, one of the palladium-mediated cross coupling reactions recognised by the 2010 Nobel Prize in chemistry.   However, Ian Fairlamb who works on transition metal catalysis at the University of York, UK, thinks that those reactions are only the start. ’I think the most exciting thing is what you could do with this in the future,’ he says.

The idea of making a drug in situ is the big thing for Fairlamb, who recalls how many palladium couplings are used in the pharmaceutical industry. ’The problem is often that the final drug compounds don’t enter the cells well but the precursors would,’ he explains. ’The potential is very high for the development of that area and for tuning the catalyst.’

Johansson is already working on this, speeding up the catalysis and working to synthesise therapeutic drugs using the palladium microspheres.