Chinese researchers have developed a magnetic solid acid catalyst that raises the prospect of efficiently converting biomass cellulose into useful chemicals, such as sugars for biofuel production.

According to the researchers, the catalyst is better than conventional equivalents because it shows good hydrothermal stability and can be recycled - magnetic nanoparticles pull the acid away from the substrate when a magnetic field is applied.

Using biomass as a source of renewable fuel has attracted interest in recent years in response to global climate change and the search for alternatives to fossil fuels. The main component of biomass is cellulose - a polymer comprising many glucose units linked by beta-1,4-glycosidic bonds, with each chain then interconnected by hydrogen bonds. This structure makes cellulose a tough compound to break down. Enzymes or acid catalysts are needed to do the job. But then separating the catalyst from the reaction residue can be energy intensive and costly.

Now, Yao Fu, at the University of Science and Technology of China in Hefei, and colleagues have come up with an answer. Inspired by previous work that showed sulfonic acid functionalised mesoporous silica materials work well as acid catalysts,1 the team designed and synthesised their new sulfonic acid catalyst in the presence of magnetic Fe3O4 nanoparticles, triblock copolymers and hydrogen peroxide.2 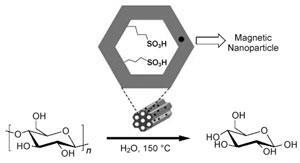 ’By using our new catalyst, we saved an energy-consuming process to separate the solid catalyst and concentrate the glucose solution,’ says Fu. The team tested the catalyst by studying the hydrolysis under different conditions of various carbohydrates, including: cellobiose, starch, cellulose and lignocellulose from corn cobs. They found their sulfonic acid effectively hydrolysed 1,4-glycosidic bonds, producing glucose yields of up to 96 per cent from cellobiose, a disaccharide comprising two glucose molecules. However, only 50 per cent yields were obtained from amorphous cellulose. Importantly, the acid could be used repeatedly without deactivation.

’Developing a heterogeneous catalyst for cellulose hydrolysis has been a goal for many scientists,’ says Joseph Binder, who researches biofuel chemistry at the University of California Berkeley, US. He thinks the enhanced separation and stability properties of the new catalyst are an encouraging contribution towards this goal. ’Still, the challenge of achieving high yields of glucose through the action of a solid catalyst on the insoluble cellulose substrate remains to be solved,’ he adds.

Fu acknowledges that further work needs to be done to realise the industrial potential. ’The optimisation of hydrolysis conditions and low cost catalyst synthesis need to be overcome,’ he says. But after modifications have been made to the process and reactor, Fu is optimistic that the process of hydrolysis of cellulose using a magnetic acid catalyst can be scaled up to industrial level.