Among a catalogue of errors, incorrect cement composition has been raised as a contributing factor in the Deepwater Horizon oil disaster

Among a barrage of poor management decisions, failing safety equipment and human errors blamed for the explosion on the Deepwater Horizon oil rig, one of the crucial failures could have been mistakes in the chemistry and application of cement intended to seal up the well. 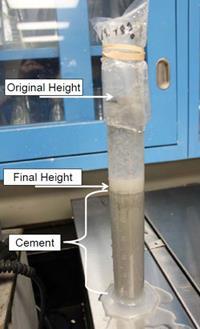 A sample of the unstable cement used to seal the well

On Wednesday, BP released a report from its internal investigation into the chain of events leading up to the disaster in the Gulf of Mexico in April. The report lays blame across the shoulders of all three parties involved- BP, the rig owners Transocean, and service contractors Halliburton. ’It is evident that a series of complex events, rather than a single mistake or failure, led to the tragedy,’ said BP’s outgoing chief executive, Tony Hayward.

One of the key failings, suggests the report, was in the process of cementing the bottom of the drilled well in place and then plugging it so that the well could be temporarily abandoned.

Cementing is a complicated business, explains Greg McCormack, director of the petroleum extension service at the University of Texas in Austin, US. The cement needs to be light and fluid enough to flow down to the bottom of the well before it hardens - which is further complicated by the high temperature and pressure in the well. It then has to be forced up and around the bottom of the hole to secure the well bore pipe and metal casing in place and stop oil and gas leaking from the reservoir. ’To do that they added nitrogen to the cement,’ he explains.

On teh basis of independent laboratory tests, the BP report claims that this nitrogen-cement foam was unstable under the conditions in the well, causing ’breakout’. This happens when nitrogen forms large bubbles and porous pathways through the cement, which would allow oil and gas to penetrate the cement seal. In the BP investigation, the foam structure of samples of a representative cement slurry collapsed as the cement cured, leading to a dramatic decrease in volume (see picture).

However, McCormack is not completely convinced that the problem was with the cement chemistry. ’The other challenge is to make sure all the cement gets to the right place with no voids or weak spots,’ he says, and that’s down to the way the job is done. He notes that the report states there were significant differences between the method and cement composition proposed by the design team and what was implemented by the contractors on the rig.

’The failure of the cement barrier is of particular concern because similar ones are installed in all wells,’ says Richard Pike, former BP executive and current chief executive of the Royal Society of Chemistry. Pike adds that once the cement barriers had failed, the events that followed exposed other shortcomings in the management and operating procedures of all the companies involved. ’While it is important that these failings are addressed,’ he notes, ’working out why the cement barrier failed - whether that is down to the cement chemistry, the process, or both - is crucial to making sure this kind of thing doesn’t happen again.’