A cloth that changes colour when oxygen levels drop has been developed by scientists in China. The cloth could be used to make clothes that monitor oxygen levels for miners, high altitude adventurers and space explorers. 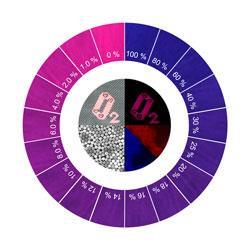 The dyes in the chameleon cloth are excited under UV light and emit in the visible region, which is captured on a digital camera. The picture shows the colours at different oxygen concentrations

Xi Chen and colleagues at Xiamen University combined the chameleon cloth with a digital camera to capture real-time images, giving a quick readout of oxygen levels. Locating an oxygen deficiency to prevent danger is very important, says Chen. ’When I saw on television that coal miners were trapped in mines and died because of a lack of oxygen, I felt sad and tried to figure out a simple method to detect oxygen.’

The team made the detector by coating oxygen-sensitive polystyrene microparticles onto cotton thread and embroidering the thread into a piece of cloth. First, the microparticles were loaded with a blue hydrophobic stilbene reference dye and an oxygen-sensitive red dye. ’The biggest challenge was selecting suitable dyes,’ says Chen. The dyes had to be hydrophobic, photostable, non-toxic (or have low toxicity) and not leak after encapsulation, he adds.

The dyes in the cloth are excited under ultraviolet light and then they emit in the visible range. ’Since the blue reference emission and the red oxygen-dependent emission match the blue and red channels of the chip in digital cameras, respectively, it is possible to analyse the brightness signal recorded in colour images,’ explains Chen. The blue dye didn’t respond to the oxygen and its intensity remained the same at different concentrations. However, the red dye was very sensitive to oxygen - its red emission decreased with increasing oxygen concentration.

Other colorimetric oxygen sensors have a number of problems: they require special excitation lamps and optical filters, the inhomogeneous dye distribution caused errors, the sensors were rigid and gave a relatively weak luminescence and harmful chemicals were released from the sensing films. ’By fabricating the chameleon cloth, we solved all these problems,’ says Chen.

’This is a nice example of taking a synthesis of ideas into the world of "materials science" to make a chemo-responsive material,’ says Peter Douglas, an expert in oxygen sensors from Swansea University, UK.  ’It is not immediately obvious where it would be used in practice, but now it is available, perhaps real practical applications will follow.’