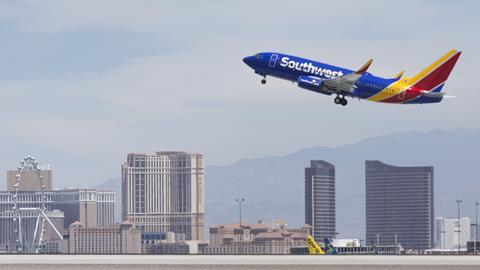 A dramatic reduction in air travel costs is helping to fuel scientific collaboration in the US, according to research presented at the Royal Economic Society’s annual conference at the University of Sussex in late March.

An international team found that the introduction of cheap airfares translates into a 50% increase in research partnerships between two regions, and that surge is closer to 80% when output is weighted by citations. The researchers – Christian Fons-Rosen from Universitat Pompeu Fabra in Spain, Christian Catalini from the Massachusetts Institute of Technology, US, and Patrick Gaulé at the University of Bath in the UK – concluded that the additional collaborations facilitated by the lower airfares are of high quality.

The cost of air travel in the US has dropped by over 50% per mile in the last three decades, and the newly presented findings show that scientific collaboration jumps by 30-50% when Southwest Airlines – a major low-cost carrier in the US – establishes a new route between two places. This effect held across different scientific fields, including chemistry. Importantly, flight prices drop by an average 20% after Southwest Airlines enters a new route.

Specifically, the analysis revealed that scientific collaborations among cities increase in chemistry by 36% after Southwest introduces a new low-cost route between them, as compared to 26% in physics, 49% in engineering, and 85% in biology. ‘This suggests that the benefits of cheaper air travel are not specific to a scientific field but may be present across the life and physical sciences,’ the authors said.

They anticipate comparable or even more dramatic results beyond the US. ‘We would expect the same effect to occur in Europe as well…where there are even more low cost airlines.’ Gaulé tells Chemistry World.