By replacing tungsten with iron, scientists have cut the cost of a common greenhouse gas reduction reaction

Scientists from China have replaced the tungsten oxide in a widely used greenhouse gas reduction catalyst with iron oxide, which improves the selectivity and reduces the cost of the catalyst.

Produced at any combustion site, nitrogen oxides (a mixture of NO and NO2) – common greenhouse gases – are found anywhere from industrial sites to car exhausts and are regulated by a number of international agencies. As such, several catalytic reactions can be used to reduce the amount of nitrogen oxides produced. One of the most common is selective catalytic reduction (SCR), which converts nitrogen oxides into N2 and H­2O using a reducing agent, commonly ammonia, and a catalyst. 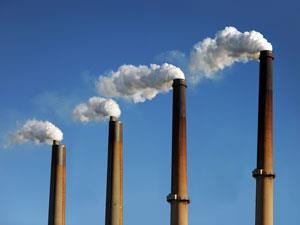 The most common catalysts for the reaction are metal oxides such as the industrial catalyst V2O5/WO2-TiO2. Tungsten oxide (WO2) acts as a promoter. It decreases the amount of nitrous oxide (N2O – a side product of combustion at high temperatures that has a greenhouse gas potential 300 times that of carbon dioxide) and forms elemental nitrogen (N2) instead, but it is expensive and scarce.

The team, led by Junhua Li from Tsinghua University, Beijing, has developed a method that replaces the tungsten oxide promoter with the widely available Fe2O3, which is not only significantly cheaper than WO2 but shows comparable SCR activity and maintains the selectivity for N2 over N2O. In addition, a magnetic field can be used to prevent the iron oxide, and therefore the catalyst, being removed with the fly ash (a residue generated by combustion comprising fine particles that rise with the flue gases and is removed).

Atsushi Satsuma, a catalyst expert at Nagoya University in China, says that this advance provides SCR technology for a new audience. He adds that he hopes that ‘the technology will promote the prevalence of ammonia-SCR in developing countries’.

Li looks forward to developing the work further and will explore the role of sulfur side reactions on the catalyst in the future.