A better understanding of covalent interactions between rocks and plates might help with predicting earthquakes, a US group says

New research suggests that scientists must take into account chemical bonding across fault lines to understand the friction generated between tectonic bodies. But not everyone in the scientific community is convinced that nanoscale forces are relevant to enormous tectonic events, such as earthquakes.

Two objects become harder to slide apart the longer they sit in contact, explains lead researcher Robert Carpick from the University of Pennsylvania, US. This is known as the ageing effect, and there are two ideas to explain it. One camp thinks it is due to creep: the two surfaces slowly mould or deform into each other increasing the contact area with time. The other camp believes that the area of contact doesn’t change, but the quality of the interface does. Carpick, who pitches his tent in this second campsite, explains: ’The strength of the interface is increasing, and at the atomic level the idea is that this is due to chemical bonds forming.’ 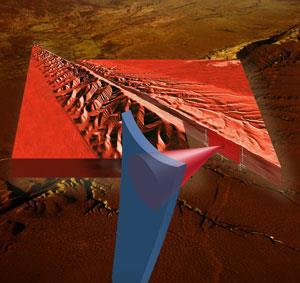 To prove that bonds form across rock interfaces over time, the team put a 2nm wide AFM (atomic force microscope) silica tip in contact with a silica surface, and measured the force of friction required to get the surfaces to move over each other after different lengths of time in contact. This is relevant because silica is a major component of most geological materials. ’We find that, sure enough, we need more friction force to slide, the longer it sits together in static contact,’ Carpick says.   Silicon-oxygen-silicon bridges had formed across the interface, he explains.

The team repeated the experiments with the silica tip and both diamond and graphite surfaces and saw no ageing. The origin of the ageing effect must be chemical, since it requires silica on both surfaces, explains Carpick. ’If the ageing were due to increased contact area - the tip getting larger due to creep - it would happen for the diamond and the graphite surfaces.’

Carpick isn’t dismissing the role of creep in earthquakes. ’We are not ruling out the creep, but we are ruling in the chemical argument. The chemistry is there, and should be accounted for in any comprehensive model of earthquake friction.’

Stefano Zapperi, an expert in the modelling of friction at the National Research Council Institute for Energetics and Interphases in Milan, Italy, isn’t as convinced. ’I think it is a very clean experiment and the evidence is very convincing for the nanoscale. But can you carry this over to the macroscale? I don’t think so.’ Fault lines are a complex mess of rock, sand, grains and fluid, he adds.