Animal biologists and chemists have joined forces to solve a chemical mystery that the insect world has kept for over a century - discovering the subtle chemical cues that ants use to tell friend from foe.

Scientists in the UK and Finland found that Formica exsecta ants secrete a delicately balanced mixture of alkenes that is specific to each ant colony. Their behavioural studies showed that disrupting this alkene profile was sufficient to madden the ants. 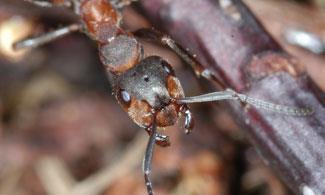 For Stephen Martin from the University of Sheffield, the lead author the study, ant chemical warfare and communication has been a career-long fascination. ’We started off looking at cuckoos - ants that lay their eggs in another colony’s nest. We wanted to find out why the ants allow this to happen,’ says Martin. ’But there are a huge number of chemicals on the eggs, and finding out which ones are important and if they’re used for recognition, has been a problem for around a century.’

Ants are also able to recognise the thousands of nestmates within their colony, but immediately attack an invading ant from a foreign colony. Although it has long been assumed that this recognition has a chemical basis, the insects produce a wide variety and mixture of chemicals, so pinning down the exact compounds that alert them to an enemy invasion has been a difficult task.

Martin chose the F. exsecta ant, as the simplest model to unravel the issue. ’They produce a simple collection of alkanes and alkenes, so if we’re going to crack one - it’s the one to go for,’ he explains.

He collaborated with chemist Falko Drijfhout at the University of Keele, UK, who used gas chromatography mass spectrometry (GC-MS) to study the profile of alkenes produced by each colony. Drijfhout found that, within a single colony, the profile of alkenes was almost identical in each ant (all containing between 23 and 29 carbons), suggesting that they only use alkenes - and not alkanes - to spot an intruder among their nestmates.

To study this, the researchers took an ant from the colony and treated it with hexane - a solvent that dissolved the personal alkene-based scent. ’When we treated an ant with a different, synthesised alkene and reintroduced it to the colony, the ants investigated it with their antennae and it was immediately attacked,’ says Martin. Ants treated with synthesised alkanes were ignored, showing the ants were relying on the alkene profile alone to recognise invaders.

"When we treated an ant with a different, synthesised alkene and reintroduced it to the colony, the ants investigated it with their antennae and it was immediately attacked. But ants treated with synthesised alkanes were ignored" - Stephen Martin

The next step was to test the response to a dummy ant, disguised with the alkene from another colony. For this, the researchers isolated the two colonies with the most different profiles. ’[The insects] are incredibly sensitive to tiny changes in these profiles,’ says Martin. ’It’s not a question of one colony making one chemical and another making a different one - these are tiny up or down-regulations of alkenes with different carbon chain lengths. That’s what has stopped this from moving on.’

Using glass beads to simulate dummy ant invaders - they made exact copies of the two profiles. ’We were able to create next mate beads and non nest mate beads,’ says Martin. ’When beads with the colony odour were introduced they were investigated then ignored, but the ants behaved aggressively towards the beads with the foreign odour, trying to remove them.’

Martin says that when it comes to studying how these animals communicate, their often complex chemistry is the ’hard part’, and he hopes that this breakthrough will move enable researchers to move their studies forward after a century of frustration. ’We now need to find out how they are making these chemicals - and investigate what makes some colonies more aggressive than others.’