A British chemist is waiting to hear if he has entered the record books with a bang, after his attempt last night to beat the world record for the most fireworks launched simultaneously. 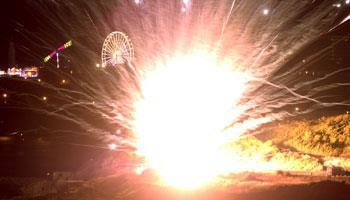 Rockets light up the night sky over Plymouth

Rocket man Roy Lowry of the University of Plymouth set off 55 000 standard retail rockets in five seconds, and is now awaiting confirmation from Guinness World Records that the record is valid. The number to beat is 39 210, and Lowry’s team is confident that enough of their rockets detonated to beat that total. 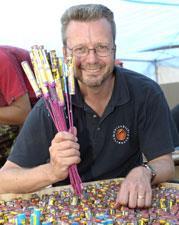 Lowry applied a scientific approach to his record-breaking launch at the UK fireworks championship held in Plymouth. Everything from the density of rockets (2 rockets per square inch) on the specially-designed rig to the effect of the weather was factored into the calculations.

The parabolas of the rockets’ flight path and the fall-out zone from their detonation are affected by the wind speed and direction, Lowry explained. ’We have mocked up several scenarios using spreadsheets’ he told Chemistry World  before the attempt, ’and we’ll use the most suitable one on the day.’ 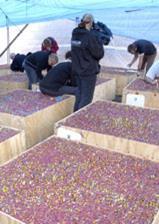 Dedication: that’s what you need

The rig itself, made up of 15 wooden frames, was engineered to solve the problem of igniting so many rockets so quickly. The top of each frame was laced with black match, a cotton string that is coated and impregnated with explosive black powder. A capacitor was used to spark a flame that travelled at 25 metres per second along the black match and under the rockets.

The record bid was intended to help rid scientists of their ’men in white coats’ image, Lowry said. ’This is to demonstrate that science is fun.’

The Chemistry of Fireworks

Explore the chemistry and physics behind the art of pyrotechnics through this fascinating book.

November 2005 saw the 400th anniversary of the gunpowder plot. Each year we celebrate the fact that the plot was foiled but it now seems unlikely that the gunpowder would have igni...