Chemical analysis of pottery fragments from bottles found in Honduras has uncovered an ancient, alcoholic chocolate drink used by early civilizations to toast special occasions. The finding has pushed back the earliest use of cacao - the plant source of chocolate - more than 500 years, to between 1100 and 1400 BC. 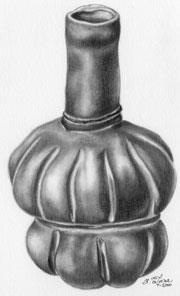 The US team, led by Patrick McGovern from the University of Pennsylvania, took samples of pottery from an archaeological site in Puerto Escondido, Honduras. Residues from the inside of these pottery bottles tested positive for theobromine and caffeine - key compounds in the cacao plant.

The use of liquid and gas chromatography mass spectrometry (LCMS and GCMS), has enabled the archaeologists to chemically confirm their hypothesis that the earliest serving vessels were used for cacao. ’We were surprised to get such a strong confirmation,’ said John Henderson from Cornell University, the lead author of the study. ’Eleven of the 13 samples we selected tested positive.’

It is already known that ancient Aztec and Mayan civilisations used cacao seeds to make a chocolate drink, but the authors of this study say that this is evidence of an earlier, fermented drink made from the sweet pulp around the seeds. Henderson explained that the shape of these bottles gives an important clue about the kind of beverage they contained. ’They had long necks, not suitable for pouring back and forth to produce a froth, which was a key element of the [later] seed-based drink.’

’The Mayan and Aztec drink made from the seed usually has additives - honey, chilli, flowers, vanilla. We saw no evidence of these in any of our samples, so this points to a different kind of beverage,’ added McGovern.

The study has revealed how chocolate emerged onto the world stage, and became a valuable commodity for these early civilisations. ’It was the social grease of ancient Mesoamerican societies,’ Henderson told Chemistry World.

And, unlike today’s ubiquitous confectionary, consuming chocolate was a sign of social importance 3000 years ago. ’It was used especially by elites to create and enhance social distinction between them and [ordinary people],’ said Henderson.

An alternative way of shaping chocolate - everyone’s favourite food - has been discovered.