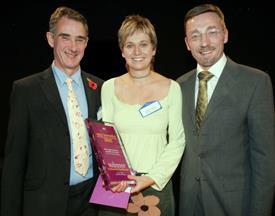 The award, made to new journalists with no more than three years’ experience, is based on three feature articles written in the last year. Sanderson’s features were praised by judges for turning a subject they found ’impenetrable’ into pieces that were ’readable, interesting and absorbing.’

Sanderson welcomed the recognition of chemistry alongside topics covered by other publications highlighted by the awards, including Loaded and FHM magazines, The Guardian  and Farmers Weekly. ’So chemistry isn’t so impenetrable after all,’ she said.

Sanderson was selected from 100s of new journalists whittled down to a shortlist of 10. The topics she covered included the chemistry of cooking, with multi-Michelin-starred Heston Blumenthal (CW May, p34); the international diplomatic role of Britain’s science attach?s (CW February, p40); and one-time chemist Gordon Moore, along with his eponymous law that has driven the electronics industry for 40 years (CW July, p38).