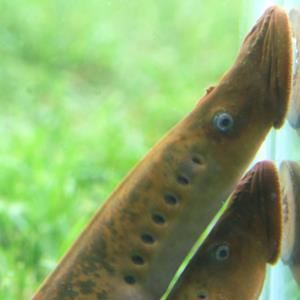 The discovery, which took 15 years, should help with efforts to control these eel-like parasitic fishes in the Great Lakes of North America.

The sea lamprey, one of the oldest living relics of vertebrate evolution, spends most of its life (3-20 years) in freshwater streams as a non-parasitic larval form, before metamorphosing into an adult. Adults migrate to the ocean or a large lake, where they parasitise other fish by attaching to them and feeding on their blood. After about two years, lampreys return to the streams to spawn and then die.

Sea lampreys colonised the Great Lakes of North America in the 1900s, decimating many of the local fish populations, including trout and whitefish. In the 1950s, the US and Canadian governments implemented a control programme, which has reduced the numbers of sea lamprey by 90 per cent. The scheme involves a combination of chemical control - the pesticide 3-trifluoromethyl-4-nitrophenol (TFM) - and physical measures - barriers.

Researchers at the University of Minnesota have spent the past 15 years investigating a putative pheromone released by sea lamprey larvae, which could offer a cheaper and more environmentally-friendly option.

The team used high pressure liquid chromatography to fractionate water from streams containing lamprey larvae. They tested which fractions generated the greatest response from adult lampreys, and analysed the most potent fractions using nuclear magnetic resonance spectroscopy. They then identified three compounds that when combined could attract adult lampreys. These compounds were: a novel disulfated aminosterol, termed petromyzonamine disulfate; a novel disulfated steroid, termed petromyzosterol disulfate; and petromyzonol sulphate, which is derived from lamprey bile acid.

The researchers are now trying to synthesise the three pheromone constituents, although water extracted from lamprey nurseries is already being used to trap adult lampreys. ’Using these extracts has been shown to work,’ said lead researcher Peter Sorensen. ’Capture rates are up sixfold.’ Jon Evans