Lead isotope analysis of ore from the Dominican Republic reveals an unexpected provenance for the material.

Samples of galena, a lead ore, excavated from a 15th-century settlement on the north coast of the Dominican Republic were thought to represent one of the earliest attempts by Europeans to mine silver from Caribbean ores. But further analysis of the samples refutes this hypothesis, and reveals an unexpected origin for the ore, report a team of American scientists.

On Christopher Columbus’ second expedition to the Caribbean in late 1493 to early 1494, the explorer, along with about 1500 of his countrymen, established the settlement of La Isabela. The settlers came to the New World with the expectation of making their fortunes from the mining of precious metals. After about four years, however, with little to show for their efforts except overwork, disease, and food shortages, the colony was abandoned.

Location of La Isabela, settlement founded in 1494 by Christopher Columbus in search of silver and gold.

Archaeologists first excavated the site in 1989 and over the next 10 years recovered, among other things, crucibles for assaying precious metals, liquid mercury for extracting gold, and blocks of galena and slag, or smelting waste. The most abundant type of slag was a lead silicate glass.

’It took us a while to figure out was going on,’ said David Killick, an anthropologist at the University of Arizona, Tucson, US. ’Why waste perfectly good lead ore by turning it into lead silicates?’

It wasn’t until the researchers analyzed the glass by SEM that things started to make sense. 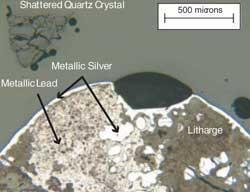 ’When we saw the silver in the lead silicates we thought, ’Wow, silver-bearing lead deposits in the Caribbean,’’ recalled Killick. This suggested that the inhabitants of La Isabela were trying to extract silver from galena by cupellation, a process whereby the ore is heated and reduced to metallic lead. The silver is then separated from the lead by melting the metal in a hearth or pot lined with bone ash, which absorbs the oxidized lead, leaving metallic silver.

When Alyson Thibodeau, a graduate student in the geosciences department at the University of Arizona, Tucson, measured the lead isotope ratios of the galena and lead silicate slag from La Isabela she found that all the material came from the same source. Surprisingly, however, the ore did not match anything from the Caribbean. So Thibodeau looked at the lead isotope fingerprints of ore deposits near C?diz, Spain, the port from which the expedition sailed.

Based on the physical finds, the historical background of the expedition, and the scientific analyses presented in the Proceedings of the National Academy of Sciences, Killick’s team explains that the voyagers probably brought the galena with them to use as a reagent for assaying ores for gold and silver. But finding no precious metals in Caribbean ores, the settlers of La Isabela, in a last act of desperation, tried to extract the small amounts of silver from their own ore.

’They sat down and cupelled about two-thirds of their galena before they realized that they were wasting their time,’ he said.

’This is a fascinating insight into the real life of La Isabela,’ said Marcos Martin?n-Torres, an archaeometallurgist and lecturer at University College London, UK. ’This episode would have remained unknown was it not for the fruitful combination of science, archaeology, and history.’