Comment: Can we halt the flow of new designer drugs?

Could the dangers of 'legal high' mephedrone have been predicted? Of course they could, says John Mann

Could the dangers of ’legal high’ mephedrone have been predicted? Of course they could, says John Mann

The recent deaths of two young men, apparently from the effects of the ’legal high’ mephedrone, have re-emphasised the difficulties faced by the UK government’s Advisory Council on the Misuse of Drugs (ACMD). Already disrupted by the furore over the sacking of chair David Nutt last October, the reconstituted council has promised to advise the Home Secretary about mephedrone by 29 March, despite key scientific positions on the council remaining vacant following a mass walk-out in the wake of Nutt’s dismissal.

But could the dangers of this drug have been predicted? Of course they could.

Mephedrone is a structural analogue of (S)-cathinone, the major psychoactive constituent of the euphoriant khat. This extract of the plant Catha edulis  has been widely used in the Middle East since at least the 14th century. The reported central nervous system (CNS) activities of mephedrone, which include euphoria, enhanced confidence and an urge to socialise, are usually compared to those of ecstasy (3,4-methylenedioxymethamphetamine or MDMA), and both compounds are clearly structurally related to the class A drug methamphetamine or speed - one of the most potent amphetamines. Originally categorised as a class B substance under the 1971 Misuse of Drugs Act, methamphetamine was upgraded to class A in 2006 and penalties for its supply can be severe. 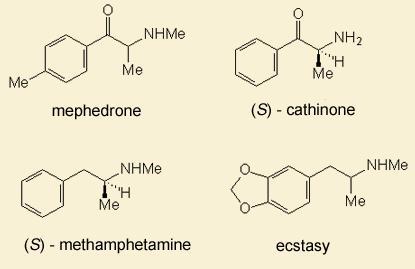 Should rules applying to a controlled substance be applied to compounds that are structurally similar?

In the US the Federal Analog Act covers all compounds that are ’substantially similar’ to the most highly controlled substances and they can then be treated in the same way as that controlled substance. Although this section of the all-encompassing US Controlled Substances Act has had a number of legal interpretations, it is now routinely used to include any structural analogue that has stimulant, depressant or hallucinogenic actions in the CNS. Unsurprisingly, mephedrone has not yet been much used in the US.

Under present legislation the UK’s ACMD considers one designer drug at a time and reports to the Home Secretary. Yet the designer drugs market is being supplied with dozens of new substances each year, many of them, like mephedrone, being produced by chemists in China.

Chemists trained as part of China’s huge contribution to the generic (pharmaceutical) drug market would be well qualified to both design and produce the relatively simple structures of a whole range of novel substances if they so desired. None of this is new and the amphetamines have been the target of illicit chemical activities since the 1960s. What has changed is the scale of the chemistry, the competence of the operatives and access to the internet for dissemination of information and even sales. Against this background it is difficult to see how the ACMD can respond on a drug by drug basis.

The solution is to follow the US model. A good patent lawyer could easily compile an all-encompassing list of potential analogues, all of which could then be designated class A or B according to the classification of the parent drug. This should avoid the sale of the new substances via the internet under the pretence that they are plant foods (as with mephedrone) or health foods, and make life more difficult for the designers and dealers. The occasional appearance of completely new drugs like Spice Gold, based on the structure N-butyl-3-(1-naphthoyl)indole, first prepared by John Huffman of Clemson University in 1995 and shown by him to have cannabinoid-like activity, will have to be dealt with on a compound by compound basis. However, a list of all likely analogues can quickly be assembled and then covered by a blanket ban.

One criticism of such a prophylactic blanket ban would be that it could interfere with the activities of the pharmaceutical industry or chemical supply companies. However, the former is used to supplying its products via well regulated pharmacies, and the latter have had to come to terms with greater scrutiny due to the threat of terrorism. A further fear that a blanket ban would unnecessarily criminalise substances that might ultimately prove to be harmless, is worth the risk. After all, one young life saved is worth the odd mistakes in classification.

John Mann is emeritus professor of chemistry at Queen’s University Belfast and author of Turn on and tune in: Psychedelics, narcotics and euphoriants